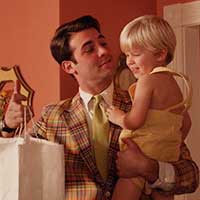 This was one of my favorite episodes so far this season—and in the running for favorite of the entire series. Don and Peggy are on the same team again (finally) and Bob Benson returns!  Peggy, bemoaning her age and singleness, rests her head on Don’s chest innocently as he comforts her in a fatherly way, while dancing to Sinatra’s “I Did It My Way.”  Don points out that the song, serendipitously playing over the radio, is no coincidence—it legitimizes their decisions (or fates) to put career before family.  Later the two break bread with Pete (a soon-to-be-divorcee) at a fast food restaurant and you’re meant to realize that, along with all the other cultural shifts happening during the show, the definition of family is also changing.

Family is where you find it, though the nuclear ’50s idea of family is still a pressure for both women and men, as seen in the case of Bob Benson. Bob has lost a bit of his optimistic sheen, though he puts his Boy Scout charm in overdrive when he visits Joan and suggests a business arrangement disguised as a marriage proposal. But his offer appears to be born out of desperation, where prior overtures of assistance seemed to stem from his endless willingness to please. Bob Benson may remain an enigma, but there’s no mystery behind his summer prep look. It’s a classic combo— bright plaid sports coat, white button-down shirt, tie, and chinos. Peruse the slide show above for some semi-modern interpretations.

Incidentally, while Bob Benson may come off a bit too adorable, actor James Wolk, who plays the Mad Men character, is every bit the hunk. We had the pleasure of styling him in three-piece velvet suits in triple degree heat for a fall fashion feature. Click through and swoon.