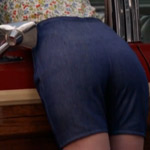 Earlier in the episode we see a svelte back-to-blonde Betty Francis (formerly Draper) turning heads in a lemon yellow ball gown. And yet, we’re still sorta surpised when we watch, along with Don and a gas station attendent, as the camera pans from the sandals to the derrier of a lady who turns out to be none other than Betty Draper, looking every bit her classy and fresh-as-a-daisy ladylike self.

We found a similar sleeveless button down from Au Jour Le Jour printed with sunglasses instead of flowers. And some bright yellow shades from Etnia Barcelona. As for her footwear, I had to rewind a couple of times to be sure, but Birdie is wearing Jack Rogers sandals. The company first made that style of shoe for First Lady Jackie Kennedy (since we all know Betty is “a Jackie,” it was a nice touch). We found shorts from River Island that were a pretty close match, too. High-waisted shorts are super hot this summer and Don proves they had a sizzling effect back then too. During a rare intimate moment at Bobby’s summer camp, Don warns Betty that she’ll get eaten alive by mosquitos. Betty disregards the warning saying, “you know mosquitos ignore me.” Her dapper first husband adds, “…not in those shorts.”