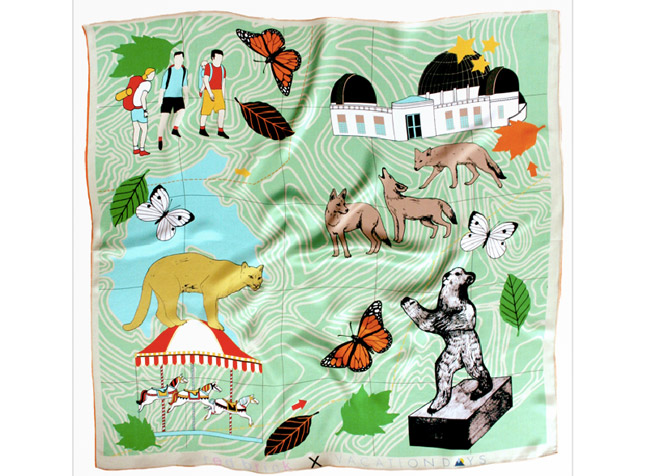 You probably wouldn’t wear a silk scarf on a morning hike through Griffith Park, but that doesn’t mean you shouldn’t wear the scenery of Griffith Park tied fashionably around your neck—or head, or wrist, or bag. And we know just the thing.

According to Robertson, his design process with Mabon involved his documenting the wildlife-filled park, and took about six weeks to complete. The resulting print, complete with the Griffith Observatory, a pack of coyotes, and a mountain lion (like the ones profiled in this November issue longread), is whimsical—and unmistakably L.A. “Upon moving here [from New York] I was struck by the space, the light,” says Robertson. “More than anything there was a reconnection to nature that my wife and I really, really loved. New York is very manicured. But I get the feeling that L.A. long ago conceded to nature.”

The Griffith Park Trails scarf measures 26″ by 26″. It is available for purchase at Matters of Space, in Highland Park, and for $65 online at Vacation Days.