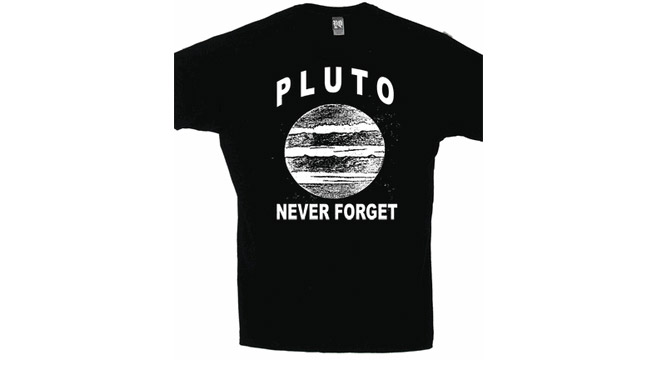 I love Y-Que, that little shop of clever on Vermont in Los Feliz. Their neighborhood tees are worth a chuckle (Downtown LA features a shopping cart; Loz Feliz, a skunk).

But I found my favorite new t-shirt there… It gives props to what was once the outermost planet in our solar system. If you’re not a geek like me, you might not even be aware of Pluto’s demotion. I had the opportunity a while back to interview astronomer Mike Brown, the man responsible for it. In 2005, Brown thought he had discovered a 10th planet (Eres) in our solar system—turns out, it was not technically a planet because of its size and since it was larger than Pluto, that meant Pluto was not technically a planet either. It sparked a huge controversy (Brown even got death threats from 3rd graders). Eventually, Eres and Pluto were downgraded to “dwarf planet” status. This t-shirt honors the icy little orb of our elementary school science classrooms. AND the ink glows in the dark!

For those of you not into science, there’s another “Never Forget” tee at Y-Que— for the Hostess with the mostest—Twinkies…