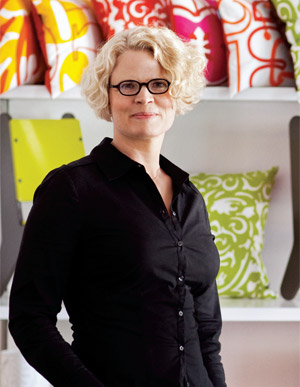 Firm stand: “We always have a point of view,” says Julie Smith-Clementi, a partner in the architectural firm Rios Clementi Hale Studios. Light fixtures resembling chess pieces illuminate a park in Glendale. Wall images of ladybugs or butterflies identify buildings at an elementary school near downtown. Odd offshoot: Creating furniture to fill the spaces they have designed, including 13 child care centers at movie studios, led to the launch of notNeutral, a home decor line for the consumer market. It’s an unusual extension for an architectural outfit. “Making multiples instead of one-offs is more of a European model,” says Smith-Clementi, who trained in Florence. “In Italy, architects are considered professionals in the design of product, not pigeonholed in one realm.” Two-way dialogue: notNeutral pieces draw inspiration from projects under way in the architecture offices; map drawings have resurfaced on plates for the home. In turn, a dish decoration influenced the look of a ceiling in the Mark Taper Forum: “We supersized the idea with ribbons of metal in a lacy pattern.” » 639 N. Larchmont Blvd., L.A., 800-270-6511.