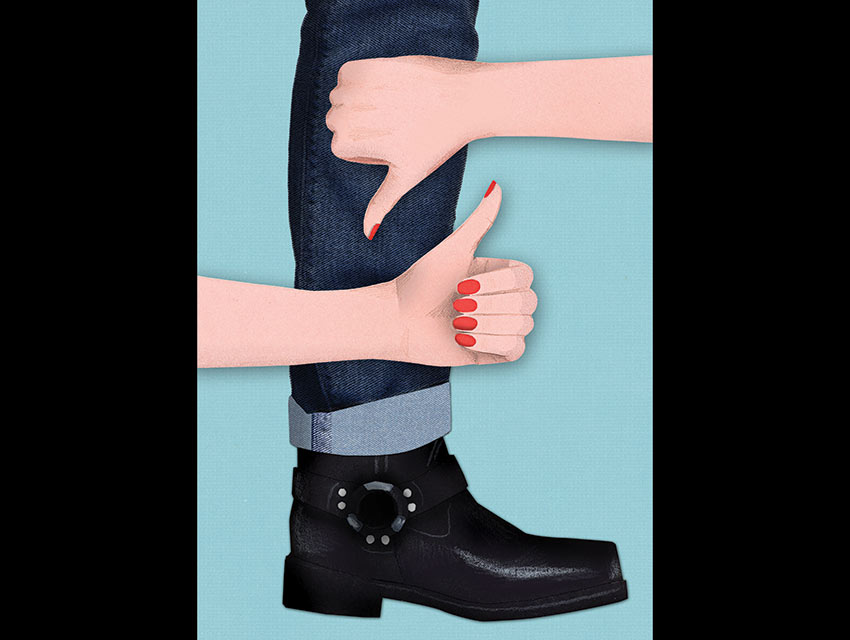 Football, Harleys, and beer—what appeals to most American men means little to me. I do yoga; I ride a beach cruiser; I drink green tea. There is one place, however, where male stereotypes and I intersect. When it comes to fashion, I need a helping hand.

Los Angeles is celebrated sartorially as a place where anything goes. I’ve long felt this maxim applies more to women than men. The origin of my style woes is easy to pinpoint. Flash back to the San Fernando Valley, 1982, with strains of Fun Boy Three and Bananarama floating on the smoggy breeze. Ninth-grade Latin preached Vesits virum reddit (“Clothes make the man”), and I crafted my nascent identity from upturned collars, turquoise, and epaulets. As new wave became grunge and Ton Sur Ton faded before flannel, girlfriends came and went, dispensing fashion advice like bread crumbs down Melrose Avenue.

Belts should match shoes, I was told. Never wear shorts at night. No white socks with slacks or sandals. And if you want to look sharp, dress sharp. As a twentysomething producer of straight-to-landfill, low-budget films, I was eager to project a savvy I didn’t have. I cast these edicts in stone, donning pressed shirts, blazers, and dress shoes. Stepping on the set of Indecent Behavior III in my Italian lace-ups, I was mocked by a Sophia Loren look-alike smeared with green eye shadow who asked, “What’s up with the wingtips? Find those in Cary Grant’s closet?”

She moved in two months later. I cleared space by giving Goodwill half my wardrobe and exchanging several rounded loafers for a pair of square-toe boots. Sacrificing my $50-a-week dry-cleaning habit for a sliver of domestic bliss seemed like a bargain. After nearly a year, she said good-bye to me and my fraying lapels and wrinkled shirts, taking my favorite concert tee (New Order) with her.

“You only get one chance to make a first impression” became my mantra at the dawn of Internet dating. I scoured the Barneys warehouse sale for a loose-fitting style to hide my early-thirties paunch, and I suited up for dozens of dates in the same suave outfit. For months my singledom remained as constant as my clothes. Finally I met a gorgeous, irreverent, and opinionated costumer for film and television. We swapped war stories from the dating trenches, laughing and flirting amid low lighting and tequila’s glow. I walked her to her car and leaned in for a kiss. She gave me her cheek. “You’re a sweet guy,” she said, “but…” I pressed for details. “Your jacket’s too long, your pants are too baggy, and don’t get me started on your square-toe shoes.”

A few years later the promise of Burning Man and being untethered from these arbitrary rules of style beckoned. I raided thrift stores, friends’ closets, and the juniors’ aisle at American Apparel, stockpiling spandex, neon, sequins, and an oversize sombrero. On my first night in the desert I wore it all—at once—and rather than create the signature “Josh look” I had hoped for, I resembled a member of an ABBA-tribute mariachi band ambushed during Diwali. I gazed with awe at the cliques that could pull it off: leather-clad road warriors, statuesque nymphs in faux-fur bikinis, steampunk gunslingers awaiting the train to Glamor Gulch. Anything goes, I surmised, but only if you venture where others have gone before.

Today, I’m glad to report, hedonistic gatherings have been replaced by a party of two. “Happy birthday,” my new lady said, handing me a box from an exclusive boutique. I loosened the hemp twine and lifted the lid. In my lap: a cashmere cardigan with sparkling, pearlescent buttons. “I love it,” I said as my arms were guided into sleeves, “but aren’t cardigans for Mister Rogers?” She straightened the shoulder seams and smoothed my T-shirt underneath. “You mean that authentic, wise, and bighearted man?” she replied. Turns out there are many ways to be a man. Fun Boy Three and Bananarama sang it right: It ain’t what you do, it’s the way that you do it. “It looks good,” she said, “and except for those old square-toe boots, it matches what you already have.” She pushed the cuffs above my wrists and took my hands in hers. “And it fits perfectly.”