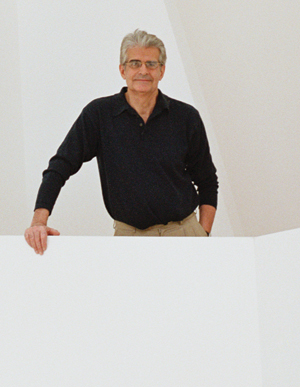 Off his rail: When the man who first applied the term “deconstructivism” to architecture converted a Depression-era Lincoln Heights garage into lofts, the last thing anyone expected was for stairway and balcony railings to be the defining elements. The safety requirements are “something architects put off to the last minute,” says Joseph Giovannini, an architecture critic, professor, and designer. But to reimagine a space with a 30-foot-high ceiling inside the bow-truss building, he created attention-getting mezzanine railings for each of the 15 units. Their swooping forms lend energy to an off-kilter structure in which halls curve and corners are obscured for an “infinity” effect. “It goes against everything my education taught me about being efficient, minimal, and following the rules of convention.” Prodigal son: Giovannini spent his early childhood in Lincoln Heights before moving with his family to Arcadia. After earning a master’s degree in architecture from Harvard, he wrote about the subject for The New York Times. He discovered the Daly Street property while running an errand. “I got goose bumps the first time I went inside. I mortgaged everything I owned and borrowed from friends to buy the building.” Full house: The rental lofts, which opened last August, count several aerialists among the tenants. » Go to dalylofts.com.