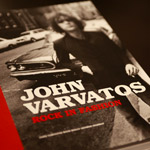 What, sartorially speaking, helps to turn a mere musician into a rock god? Hats, scarves, jeans, leather?  Menswear designer John Varvatos covers all of rock n’ roll’s signature trappings in his new book Rock in Fashion (Harper Design, $60). He leaves out nothing—15 chapters cover the whole shebang, from glitter to T-shirts. The 132 page coffee table book is crammed with photos of music’s most fashionable performers from Bob Dylan to Robert Plant and Debbie Harry to Freddy Mercury. At a recent in-store event to celebrate the book’s release, I asked the Detroit native to narrow down his list to three key pieces. Dressed in one of his Hendrix-esque military style jackets, the designer smirked and counted off “rebelliousness, individuality, and having your own personal style.”

“It all comes down to self-expression and being an original,” he said. We were then joined by rock progeny Julian Lennon, who congratulated Varvatos. Lennon claims he has recently “fallen in love with photography.” He’s currently shooting artistic stills of a film starring rocker Alanis Morissette (she plays the lover of architect and modern furniture pioneer Eileen Gray). “Taking pictures has become my passion,” Lennon said. As he was giving me a little backstory on Gray, legendary rock photographer Mick Rock approached. “This guy is a great a photographer, man, ” said Rock, throwing an arm around Lennon. “A little too good actually,” he added. “I’m gonna break his camera if he’s not careful.” I ask Rock what article of clothing he thinks makes a rock star. “Well, it’s all about tight trousers, innit?” he replied. Billy Idol might agree. But when asked during a Q&A at the event, the rocker fell silent. “That was a blurry time for Billy,” joked Rock. The photo in the slide show above may prove Rock’s theory, and it’s certainly not blurry…

* Click through the slide show above to see what other rock music legends and royalty attended the event.