Home Awards Watch John Travolta and the Return of the Necklace 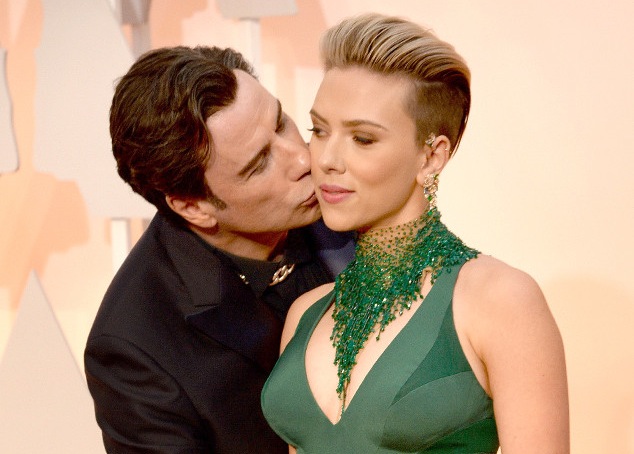 Last night Hollywood honored its best and brightest at this year’s Academy Awards. I have to say along with the telecast, the red carpet had its own surprises, which were actually refreshing in these days of stylists and predictable  fashion choices. Sure, there were certain trends, like white and black gowns (worn by Patricia Arquette, Julianne Moore, and Naomi Watts) which gave a dull sense of uniformity to the pageantry. And it seemed as if everyone was handed the same orange-red shade of  lipstick (Emma Stone, Margot Robbie, Marion Cotillard). But one accessory made a surprising comeback: the necklace. For the past few years, necklaces appeared to have fallen out of favor. Clavicles have gone bare even when celebs donned strapless dresses that cried out for them. The tradition that Harry Winston began in the ’40s of sending stars down the red carpet dripping in millions of dollars worth of jewels around their necks seemed to have gone by the wayside. Last night, however, we saw the necklace make a Michael Keaton-like comeback. From the strands of diamonds dangling around the collar bones of Jessica Chastain and Zoe Saldana to the oversized statement pieces worn by Scarlett Johansson and Cate Blanchett, the necklace, it appears, is again getting its due. But the most startling proponent of the accessory was John Travolta, who chose to wear a heavy silver choker chain in lieu of a bow tie with his tuxedo. This fashion first was likely eclipsed by his manhandling of co-presenter Idina Menzel onstage during the ceremony and Johansson earlier during arrivals. It may have missed the ire of fake Instagram account creators who chose to focus instead on Lady Gaga’s “dishwashing gloves” and a certain pom pom dress (of the latter host Neil Patrick Harris commented “it takes a lot of balls to wear a dress like that”). Bottom line: You can’t make a comeback, even if you’re a necklace, without taking some risks.

Leonard Goldberg, Pioneer of the Made-for-TV Movie, Was a Rare Figure in the Industry