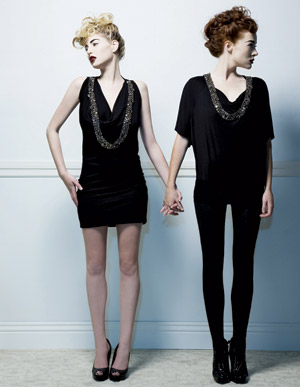 In 1997, Meghan Fielding rang up purchases of loose-fitting tracksuits and jogging bras by Adidas, Champion, and Perfetto at the boutique inside YogaWorks in Santa Monica. “None of the clothing spoke to this love of yoga and India that people were discovering,” she says. She started making T-shirts featuring her hand-drawn Buddhas, lotus flowers, and Ganeshas. Her Om Girl line was soon joined by dozens of others nationwide catering to fans of the revived fitness regimen.

Yoga may have been around for 6,000 years, but the style that accompanied it in the early aughts—snug tank tops; flared, low-rise stretch pants; and more shades of teal than anyone cares to remember—now looks dated. Many of the L.A.-based lines that began as yoga apparel are evolving into off-the-mat loungewear that embodies a higher consciousness of fashion trends. Yoga Army pushed the envelope with $200 leather-trimmed tanks. “We’ve stopped making sweat suits because that market is saturated,” says designer Sandy Wee. “Now we’re 90 percent dresses.” Not exactly what you’d wear when doing a headstand. Another label, Beyond Yoga, is adding jackets and frocks to its repertoire, in part because versatile clothing appeals to a larger customer base. Keri Lassalle, whose Web site the Y Catalog (theycatalog.com) sells yoga clothing, notes that companies are branching out because designers have sharpened their skills: “The cut is incredibly important for yoga apparel, and that kind of ideology is a requisite for high fashion, too.” Meghan Fielding recently went so far as to create a second collection called Roam, which is not meant to be worn for asanas. She continues to produce Om Girl but has herself outgrown its graphic tees in bright colors. “Roam is dressier, for spa weekends or dinner out. Everything is in neutral colors. I have passed 40, and it’s what I want to wear now.”