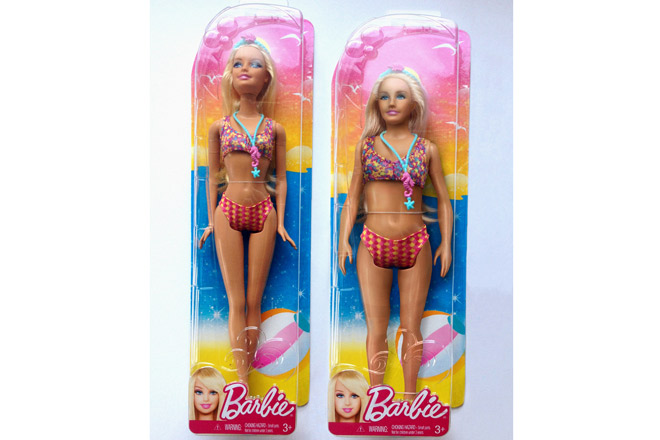 Yes, we all know Barbie’s proportions are ridiculous, impossible even. If she were real, she wouldn’t menstruate. She would have to walk on all fours, wouldn’t be able to lift her head, and would be missing vital organs. Artist Nickolay Lamm was commissioned by MyDeals.com to create a more realistic Barbie using the proportions of the average 19-year-old American woman (images of his ‘normal’ Barbie were first posted with an article on MyDeals.com, the Huffington Post ran an excerpt yesterday). Blaming Barbie for giving little girls body issues has long been debated. (In 1998, Mattel even responded by increasing Barbie’s waist circumference and giving her a boob reduction.)

Lamm thinks his take on the doll looks just as good and suggests Mattel start making them. He says he based the doll’s measurements on the Center for Disease Control (CDC) averages. That means Lamm’s Barbie is 5 foot 3 inches,  weighs 166 pounds, and has a 37- inch waist. When I put these numbers into the body mass index calculator her BMI was 29.4, which is considered overweight and borderline obese. Though his doll doesn’t necessarily look obese to me, the CDC stats point to something perhaps more frightening than the size of Barbie’s wrists—the fact that the majority of 19-year-old American women are overweight and borderline obese. If we’re going change Barbie, maybe instead of  ‘normal’  we should shoot for a ‘healthy’ Barbie as a role model, one that could walk upright but also isn’t at risk for diabetes or heart disease.

Some Tulsi Gabbard Supporters Are Becoming a Problem for Her Campaign