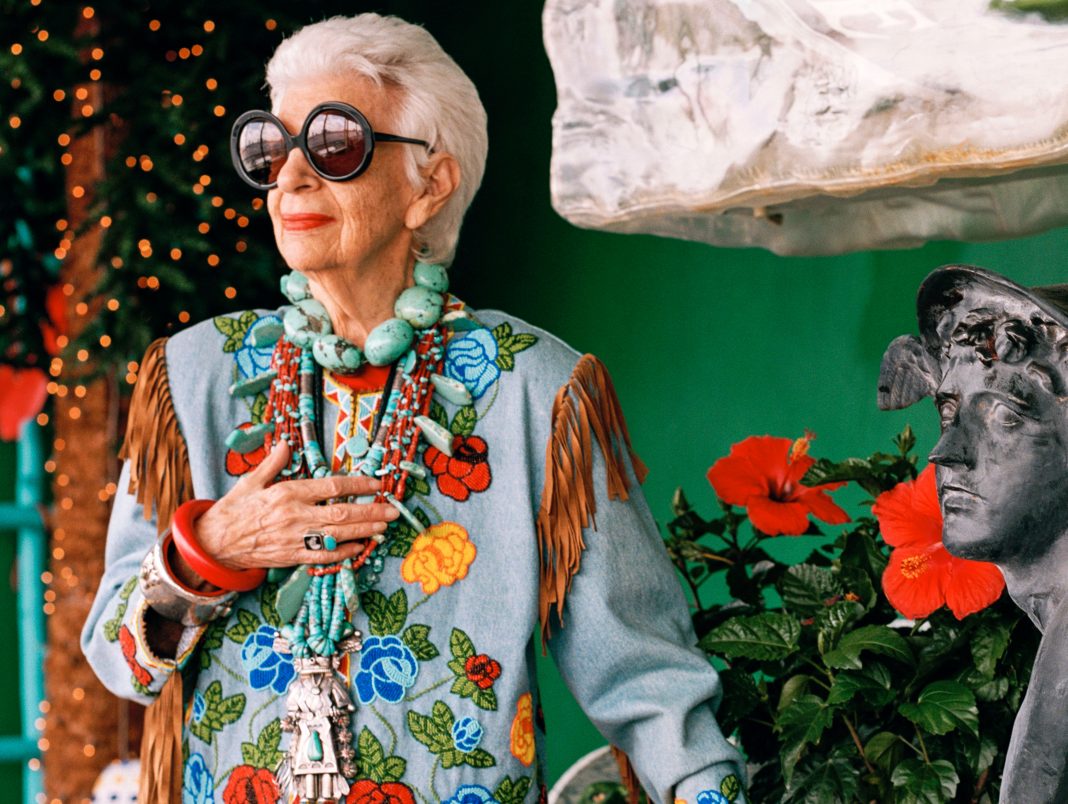 Iris Apfel has worn many hats throughout her life, influencing fashion and interior design for more than 70 years. Known for her fearless and artfully composed ensembles as well as her genuine lust for life, she’s an inspiration—and a breath of fresh air, especially in a world filled with so many cookie-cutter, model-wannabe-fashion bloggers. Apfel is the subject of legendary documentarian Albert Maysles’ last work, Iris, which opens in theaters today. Albert, who passed away in March, had along with his brother David made some of the most iconic documentaries in history, including Grey Gardens and Gimme Shelter. A pioneer of direct cinema, Albert doesn’t script his films, he simply observes. Apfel is so witty, sharp, and earnest that you can’t help but be entertained. Iris is a feel good movie for sure, though the style set might be a little disappointed to discover that the film isn’t about fashion at all (though there’s lots of it in the film, including interviews with some of Apfel’s favorite designers). It’s a story about the importance of knowing who you are and embracing it with everything you do.

The colorful 93-year old fashion maven was in Los Angeles to promote the film this week. We found her sitting at a booth in the Windows Lounge at the Four Seasons Hotel in Beverly Hills patiently answering questions from a seemingly endless line of journalists, myself among them. She was wearing her signature oversized eyeglasses and was dwarfed by the voluminous layers of chunky costume jewelry around her neck and wrists (her bracelets were stacked to her elbows). When it was my turn, I took a seat next to her and felt horribly under dressed. Slightly under the weather, Iris sipped chicken broth between questions…

The producers of the film say Iris isn’t a fashion story.
Thank God, I was very worried about coming off as an empty-headed fashionista because I love fashion and I like to get dressed once in a while but I don’t live to get dressed. I mean, people have asked me insane questions like ‘how much time do I spend in the morning trying to figure out what I’m going to put on?’ and dumb things like that. I mean there’s so much to do in the world, getting dressed is only a small part of it.

As its subject, what would you say the film is about?
What I thought was interesting was at the New York party for the film, a number of young women came by and told me they came to see a fashion film and instead they saw a love story. A friend of mine said it was a love story on two levels— a love story between my husband Carl and I—and a love story about me and my work. I love what I do.

There are several designers interviewed in the film. Who are some of your favorites?
Ralph Rucci, Naeem Khan… Duro Olowu is wonderful… Alexis Bittar is a dear friend. He worries about me. He called me this morning and said, ‘Don’t let them work you so hard. Take it easy.’ I’m going to be a godmother to his new babies.

How was it working with Albert?
He was a very kind, quiet, gentle man. He’s an enormous talent, very passionate about his work. We hit if off very well. Everyone thought we were old old friends but I had just met him while we were doing the movie. He was very nice to work with, his wife was lovely. Al was really enamored of the film and it really was his last work. I’m happy he went to heaven thinking about it.

Did you learn anything about yourself during the making of the film?
People ask me that all the time. But I say, if I didn’t know myself at 93- years old that would be pretty sad.

In the film you recall Mrs. Loehmann [of Loehmann’s department stores] once telling you that you had style.
Yes. I didn’t know what she was talking about back then.

Do you know what she was talking about now?
Yes. Style is attitude, originality, creativity. It’s in your DNA or it isn’t. I don’t think you can learn it, but you have to work at it. You have to find out who you are, what you’re comfortable with—whether you object to people staring at you…and how much you want to invest in it.

Growing up in Queens, New York, did you have any influences or experiences that you think helped shape you?
I lived in a very blue collar neighborhood and my mother wanted me to go to a more elegant school. She thought it would be helpful to get me into a better college. But my father said, ‘Definitely, no. She has to learn that she’s no better than anybody else and she has to learn how to get along with all kinds of people.’ And it was a great experience because the area was really a melting pot. Some were first generation and some had just come over… kids from all over the world. I’m so glad he insisted because I feel comfortable talking to anybody. I think the worst thing that could happen is for kids to grow up in a gilded ghetto. And they only know people in their own class and they look down on everything else. I think that’s just terrible.

Your mother owned a fashion boutique, did you experiment with fashion back then?
I don’t remember. It was so far back. Dinosaurs were roaming the earth back then. I had a pet dinosaur.

Well, in college you were the first woman to wear jeans. That was an experiment, or was it more of a rebellion thing?
Oh god no. I just thought it would be nice to have a pair of jeans.  I was at the University of Wisconsin at the time and the only place you could get jeans back then were at Army Navy stores. But they were made for all these working guys the size of Paul Bunyan. There was nothing that could fit me and the guy at the store would say, ‘Don’t you know young ladies don’t wear jeans.’ I’d tell him I’d pay him and get a pair and cut them down. He wouldn’t sell me a pair so that only made me want to have them more. So I kept going back and going back and he kept throwing me out, until finally a month or so later he called me. I guess he wanted to get me off his back. And he said he had mail-ordered me a pair of boys jeans and luckily they fit. And the outfit looked great. Everybody liked it.

If you were in control of your own legacy what would you want it to be?
Oh, I don’t like to think about that! I want to stay here a while, if I can.