Home Uncategorized In Fashion: Raising a Glass to L.A. 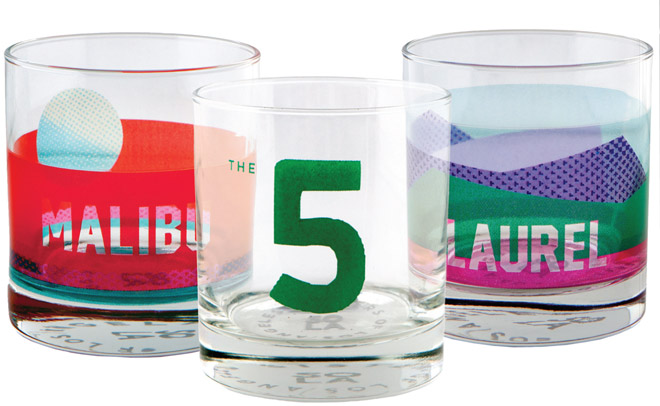 Just as “The Californians,” the Saturday Night Live skit mocking traffic-obsessed Angelenos, went viral last fall, the Sisters of LA launched their line of “Freeway” glasses. Even without the sketch, the tumblers stamped with “The 101” and “The 405” would have struck a chord here.

Former fashion publicist Sara Stein, lifestyle-brand rep Karen Alweil, and architect Barbara Bestor founded their company to address what they saw as a void in gifts that say “L.A.” “We wanted to look at Los Angeles for more than stars on the Walk of Fame and the Hollywood sign,” says Stein. “We wanted to see it through the eyes of the people who live here.”

For Bestor it was about creating a new iconography. “We don’t have an Empire State Building,” Bestor says. “We have beaches and canyons and freeways. We might put together a collection of glasses with Disney Concert Hall, Randy’s Donuts, Mariachi Plaza, and a minimall, and when you get all four, you’ve got a good picture of L.A. It’s dispersed urbanism, as opposed to the skyline or a monument.”

The company has been inundated with orders, and not just from local stores like Kitson and Ron Robinson or the museum gift shops at MOCA and the Getty. “Retailers across the country liked what they saw,” says Alweil. “They asked, ‘Can you do for us what you are doing for L.A.?’ ” SoLA responded with collections for 18 cities, including New York, Miami, and Portland. “But it all starts here,” says Bes-tor. “It’s always for L.A. first.”