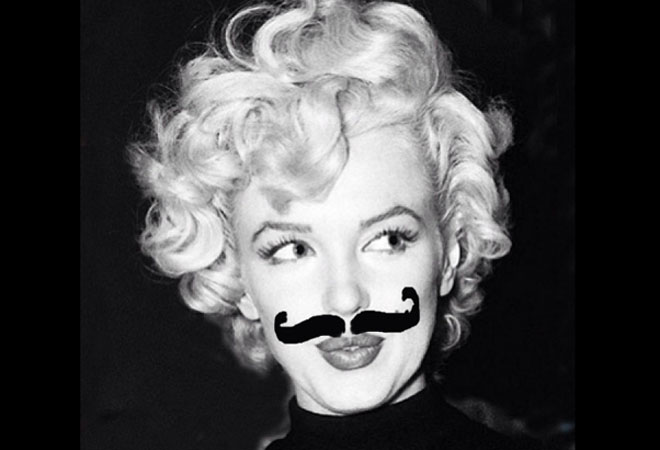 Last year, over 200,000 Americans raised $21 million for men’s health awareness and education using the power of facial hair. During the month now known as Movember, the moustache stands as a symbol of hope and a conversation-starter about how dudes can be on the defense against cancer, heart disease, and mental illness. In case you’re not familiar with the tradition, Male Movember participants, called “Mo Bros,” start with fresh, cleanly shaven faces today and vow to keep the razor away until December. (Check for ten o’clock shadow on your co-workers to see who is joining the movement.)

But Movember isn’t just for those with a bristly upper lip. Ladies can participate, too— and without the hassle of ingrown hairs. The female constituency of the Movember movement goes by “Mo Sistas.” Don’t believe us that this is a thing? One Los Angeles stand-out, Farima Nojoumi, is the Tom Sellick of Lady Movember. In 2011, she raised $6,300 and was named the #1 Mo Sista in the United States. Nojoumi used social media as a platform for conversation. “I’ve seen that health issues can be more taboo with men than women, but early detection [of cancer] really does save lives,” she said. “I do this to support the men in my life and to encourage them to take better care of themselves.”

Have ovaries and want to get involved? Here are some quick steps to follow:

– Sign Up: Specify that you are a Mo Sista so that the Movember Foundation can track how many people all over the globe are participating.

– Throw a Party: Get a bunch of friends together to celebrate men’s health and compare moustache maintenance tricks. Whether the shindig is public or private, registering the party on Movember.com makes you eligible to receive a free Party Pack.

– Raise Some Dollars: Make a donation box for the office or send an email to family and friends asking for a little green. As if funding men’s health awareness wasn’t motivation enough, for every $75 you raise, you’ll be entered to win a Mo Sista Prize.

– Raise Some Awareness: Print out a poster with information about health for the men in your life. And then tell those men they can’t have dessert until they read the whole thing.

– Plant Some ‘Stache Seeds: Start hinting to your boyfriend that you just love Ron Swanson’s manly face fur. Tell your brother and your dad that they should see who can grow their ‘stache fastest. If they give you lip, give them this permission slip.

– Don a Mo Yo’self: Take a leaf out of Marilyn’s book and use a different kind of lipliner.

Also, for inspiration, check out this video homage to Mo Sistas – it came in third for a Moscar, very prestigious.