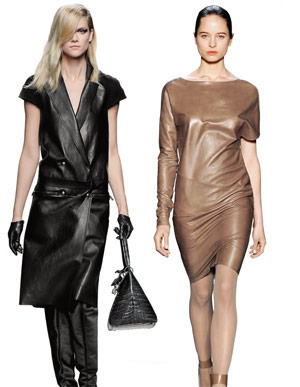 Cowhide jackets have symbolized renegade chic ever since Marlon Brando popularized the biker look in The Wild One. Leather pants or dresses, on the other hand, are invariably associated with Eurotrash staggering out of sex clubs. It’s been a long time coming, but Americans may finally be ready for fashionable skins outside of the Perfecto. Last fall Kova & T designer Christina Tang made a strapless dress in leather and ponte, a stretch knit fabric, and it sold out. “I was taken aback,” Tang says. She believes that the sour economy prompted shoppers to pass over throwaway trendy pieces for items that convey luxury: “I decided we have to have at least one leather dress in our collection from now on.”

Boutique owners have taken note of the increase in such tough-chic items. “Part of it is the ’80s revival—remember colored leather skirts?—and part of it is that the cost has come down,” says Eveline Morel, owner of the West 3rd Street boutique EM & Co. One of the lines she carries, Improvd, features Italian skins but is manufactured in China, which lowers the price. Morel says that new kinds of soft and stretchy hides (cow, pig, and lamb) have made it easier for designers to create lightweight garments that are comfortable. At Beckley in West Hollywood, owner Melissa Akkaway is doing well with items rarely seen in the past. “A sleeveless top with grommet details, a leather scarf—this is a different way to wear it,” she says. Versatility adds to the appeal of an investment piece, especially for labels hoping to sell in the “seasonless” L.A. market. Paige Premium Denim brought out a jacket whose sleeves and collar zip off and, for women unable to commit to wearing two full legs of cowhide, shorts. (Don’t make that face. A lot of designers did them for fall.) “For the holiday collection”—which hits floors in November—“I didn’t include a dress,” says designer Paige Adams-Geller. “I wish I had!”