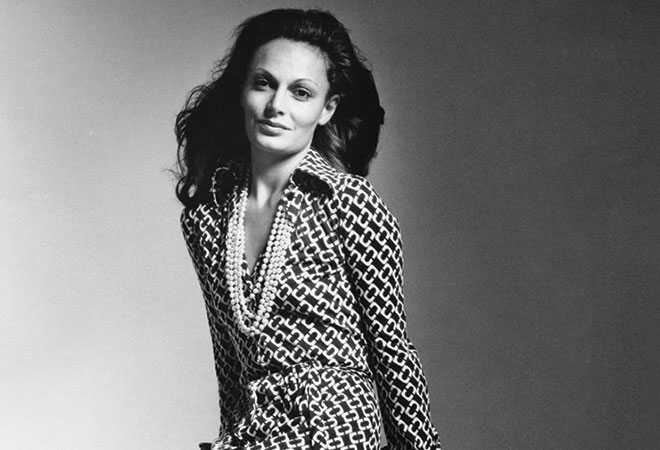 Diane von Furstenberg in the first ad campaign for the wrap dress, photographed in 1972 by Roger Prigent

Sexy but suitable for the office, it could be transformed into the ultimate disco-ready attire with a quick adjustment of the sash. Diane von Furstenberg was 26 and raising two small children on her own when she came up with her trademark creation, the wrap dress. Selling at a rate of 25,000 per week, it became an instant hit, embodying the spirit of ’70s-era female empowerment. “Women could wear it to work and feel like a woman,” says the 67-year-old designer. “There was something very liberating about that.”

The four-decade history of the iconic garment is chronicled in Journey of a Dress, an exhibition at LACMA West, in the historic May Company building. Hemlines might have risen and fallen, but over the years the wrap dress changed little; its basic silhouette in mod graphic prints endured. “It started as a top and skirt,” says von Furstenberg. “The top was inspired by the ones ballerinas wear over their tutus. I knew I wanted to make a simple little dress that would flatter a woman’s body, so I combined the wrap and skirt.” Worn by everyone from Madonna to Michelle Obama, the outfit has secured a place in fashion history (one is part of the Metropolitan Museum of Art’s permanent collection). Vintage and contemporary versions are on view along with archival images of ad campaigns and celebrities in the piece shot by the likes of Andy Warhol, Annie Leibovitz, and Helmut Newton. (Von Furstenberg is also encouraging women to share their memories at dvfwrapstory.com.)

The designer sold her business in 1984. But in the ’90s, she decided to resurrect the dress as well as her career. “The revival was really a personal thing for me,” she says. “I had gotten lost. I had moved to Paris to live with a writer—there came a point where I realized I had given up too much of myself. I missed fashion. I missed my work, which had always been such an important part of my identity. So I relaunched the business and never looked back.” » Journey of a Dress runs through April 1 at LACMA West, 6067 Wilshire Blvd., Mid Wilshire.