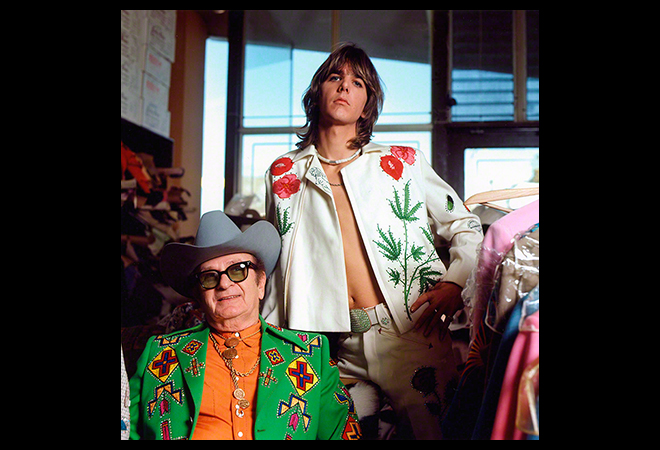 By the time Larry Weiss’s song “Rhinestone Cowboy” became a hit for Glen Campbell in the mid-1970s, the image of the country music star dressed in a glittery rhinestone-bejeweled suit had long been fixed in the popular imagination. At that point in the genre’s history, though, most singers were eschewing that sort of sartorial statement. The flashy style once favored by legends like Hank Williams and Roy Rogers didn’t fit with the outlaw persona cultivated by the likes of Willie Nelson and Waylon Jennings. But a few stars dug the old look.

Gram Parsons was one of only a handful of country musicians who successfully crossed over into rock and roll, as both a member of the Byrds and a musically influential friend to the Rolling Stones. His own country rock band of the late ‘60s and early ‘70s, the Flying Burrito Brothers, has a strong cult following to this day. For the cover photo on the group’s debut album, The Gilded Palace of Sin, Parsons commissioned an outfit made by none other than Nudie Cohn, the tailor who had given all those cowboys their rhinestones back in the 1950s and early ’60s.

Other Rubenstein portrait subjects include Willie, Waylon, and Tammy Wynette, but the image of Parsons and Cohn stands out. Nudie, by the way, had quite a back story himself. Born in 1902 to a family of Jewish tailors in Kiev, Ukraine, his parents shipped him and his brother off to America to escape anti-Semitic pogroms when he was just nine years old. After an adventurous youth, he opened his Nudie’s of Hollywood shop on the corner of Victory and Vineland in North Hollywood in 1950, where he invented the sparkly rhinestone suit, still known to country music fans as the “Nudie suit.”

The model that Cohn sewed for Parsons was unlike any other. Visible inside one lapel is the embroidered figure of a voluptuous naked woman. The green leaves featured prominently in the design on the front of the jacket are a marijuana plant, and the red-petaled flowers above them are poppies, the natural source of morphine, opium, and heroin. Five years after this picture was taken, Parsons—who had dropped out of Harvard after one semester to pursue his musical dreams—died of a morphine overdose at the age of 26.