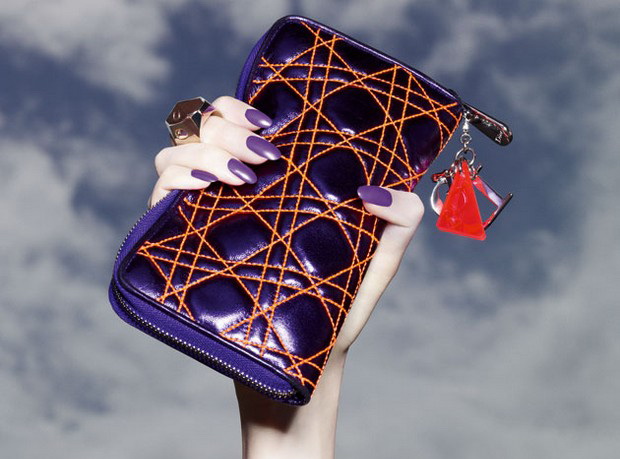 Abstract modern art and old school couture collide in the latest Christian Dior collaboration.  Acclaimed German artist Anselm Reyle created a vaguely ‘80s, Valley Girl-meets-Beverly Hills capsule collection for the legendary fashion house, translating his signature use of fluorescents, neon, and foil into Day-Glo metallic leather handbags, jewelry, scarves, shoes and cosmetics.  First debuting at Art Basel Miami in November, the limited-edition pieces make their way to the Christian Dior Boutique on Rodeo Drive this month where they will be available through March.  We asked the artist about the collaboration and his inspiration.

How did you get involved?

Delphine Arnault [Dior’s deputy managing director] has been familiar with my work for quite some time and contacted my gallery, Almine Rech, in Paris to ask if I could envisage a collaboration with Dior. I had to think about it, but finally agreed. It was a new challenge for me. I deal a lot with daily objects and influences beyond the traditional art context, for example, elements of sub culture, architecture and design. That’s why I thought this project could make sense.

Were you really given “free range”?

Yes, they gave me carte blanche. When the Dior team came to Berlin to visit my studio, together we developed the idea to create two all-over patterns based on my own artistic style, including materials, forms and colors, while incorporating the traditional heritage and codes of Dior. I found it amazing that such a big fashion house like Dior develops ideas in a similar way to the work of an artist’s studio. There were sometimes four or five of us trying out materials and colors. We cut and glued and stitched. I wasn’t expecting this artisinal, handcrafted aspect. I really liked that.

What was the process like? Did you start with your own artwork and translate it to Dior?

In my own work I often use found objects as a starting point that is further developed and modified. Similar to this working process I decide to choose the most significant Dior elements such as the “Cannage” pattern and the classical Lady Dior Bag and to bring them together with my specific language, like metallic surfaces and neon colors.

For one of the patterns I tilted the stitched “Cannage” which may be considered as a kind of intervention and deconstruction of the traditional heritage. For the other pattern I took the camouflage motif, which I have used for my paintings before. I thought about how it has been adapted by the pop world from its military background and how it then looses its original meaning. It just remains an empty surface. Usually the camouflage hides something, but here it’s the opposite— it is very visible because of the bright neon colors. These are simple ideas. Working on simple ideas is one of the main issues of my work.