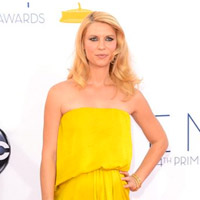 Zero. Zilch. None of my Emmy fashion predictions came through or were even close. Looks like I’ll never get a job on the Psychic Hotline Network. However, other than Claire Danes, I think the three other nominees would have looked a lot better in my picks. What do you think?

LENA DUNHAM: Wow. I was pretty shocked by her choice. That dress would make Sofia Vergara look dowdy. I think she should have gone strapless, tea length, with a ’50s-style nipped waist and full skirt in a bright color. ZOOEY DESCHANEL: Her frothy dusty blue gown looked like a prom dress. She reminded me of one of those Disney character princesses who wander around the Magic Kingdom taking photos with tourists. The bodice was ill-fitting too. She needed to get ahold of the Army Corp of Engineers that built Kat Dennings underpinnings. While it wasn’t a disaster, I wish she would have chosen something a little more grown up and less quirky-cute. MICHELLE DOCKERY: The Downton Abbey star made some best dressed lists. But I didn’t like it. The color was pretty but the shape did nothing for her. It was kind of boring, except for the bustle, so she was sitting on the most interesting part for most of the evening. I still think she would have topped best dressed lists in the Giambattista Valli dress I would have chosen for her. (Incidentally, Julianna Marguiles did wear a Giambattisa Valli gown, maybe she was listening?)