Home Uncategorized Downtown L.A. Is a Retail Field of Dreams 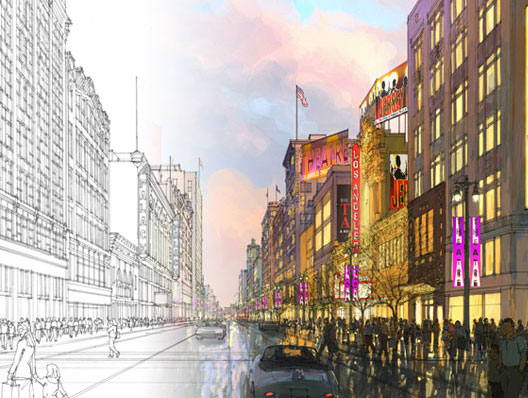 It’s a testament to L.A.’s growing caché in the fashion world that so many international clothing brands have chosen to open their only stateside outposts here. Brands like COS, Moschino, Dsquared2, and the exclusive French boutique L’Eclaireur (set to open this fall) have chosen to set up shop in Los Angeles. But perhaps what’s even more interesting is that some labels are forgoing the city’s more established shopping districts in favor of the burgeoning scene downtown.

DTLA’s expansion shows no signs of slowing. There are 96 projects currently in development (either in planning or construction stages) and many include massive amounts of retail space. A group of five former warehouses will comprise At Mateo, a 130,000 square foot retail center scheduled to open next fall in the Art’s District. When Figueroa Central, a mixed-use, mutli-tower compound, is built there will be 200,000 square feet of retail space up for grabs. And probably the most ambitious of them all is City Market. The project, currently still in the planning stages, could transform 10 acres of empty produce warehouses in the Fashion District into a mega mixed-use compound offering 225,000 square feet of retail space. There are plans for dozens of other mixed-use buildings too, and most include street-level storefront space. Who knows which brands will eventually fill these shiny new facades? For now it seems that DTLA is a retail field of dreams— if you build it they will come.