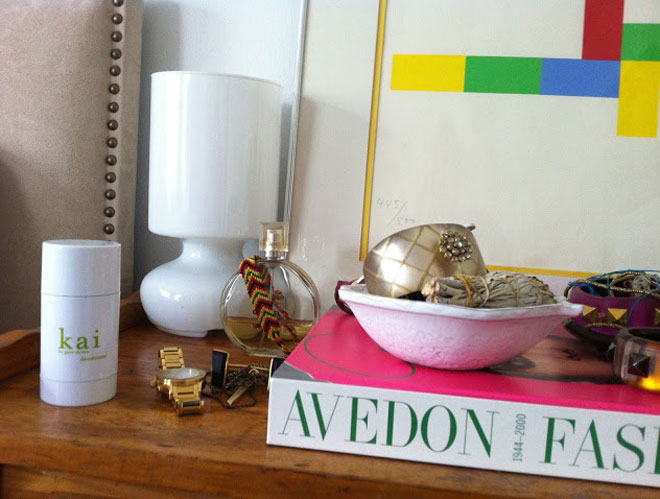 Like most people I know, I’ve been searching for the perfect deodorant for, like, ever. As if we didn’t have enough toxins to avoid, I recently discovered reports of a 2012 study linking parabens, which are used as preservatives in some antiperspirants, to breast cancer. I have a family history of the disease and my boobies are very dear to me, so I prefer to play it safe. But I mean, we need deodorant, people. I’ve tried not wearing it, which was all good until I attended an important meeting and the heightened stress put me on a one way train to Stinkville, population: two sweaty armpits. I’ve also tried Toms of Maine and the Crystal body deodorant stick, and what those experiences taught me is I’m a hippie, but I’m a high class one at that. Just as I was about to throw in the towel on my hero’s quest, Kai deodorant manifested. If you aren’t familiar with the ultra intoxicating scent of this roller ball fragrance, then you probably don’t live in Southern California. Combine that with an aluminum-free, paraben-free, sulfate-free (read: non-possibly cancer causing) formula, and I’m in product heaven. I feel like I broke up with a guy that was totally wrong for me, sweat it out for a while (pun intended) and then Prince Charming magically appeared. Hey Kai, could you make flossing more glamorous too? That would be awesome.

Amelia Champion is an L.A. based actress, writer, and improviser. Her fashion and lifestyle blog Clotheshorse NYC was recently named one of Lucky Magazine‘s “20 L.A. Style Blogs to Bookmark Now.” In her free time she likes to surf, box, and drink dirty martinis with her girlfriends.