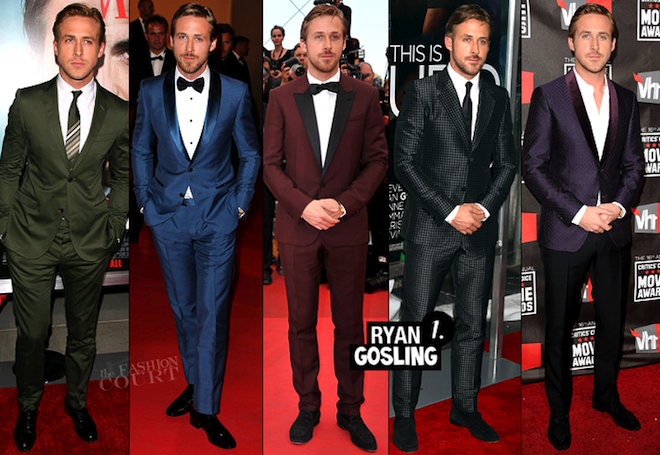 The tux is a many-colored thing for Ryan Gosling.

When director Paul Feig of Bridesmaids and Freaks and Geeks fame walked onto the set of AMC’s Mad Men for his first directing gig for the series, the crew told him casting was down the hall. Feig was dressed in his usual Sterling Cooper Draper Pryce-appropriate suit and tie, a work wear staple of his ditched by most directors for sweatshirts and jeans. “That was just my image as a kid of what a director looked like,” Feig explained, calling his work uniform a “weird affectation” from his days of aspiring after Hitchcock. With the Oscars coming up, the menswear traditionalist — named one of Esquire’s Best Dressed Men of 2012 — gave us his guide to navigating the red carpet in style.

Respect the black tie
“Leave the crazy tie at home,” says Feig. “Guys generally try to mix it up with a nuttier tie or crazy print, but it says ‘black tie’ for a reason.” He does give the okay to the occasional pattern play, noting a Brooks Brothers tie backed by red tartan he spotted on E!’s Marc Malkin.

Choose colors carefully
There will never be a new black, but a little color play is a-okay. “You just have to be classy at the end of the day,” Feig asserts. “That doesn’t mean you can’t go with a midnight blue tux. And if you can find a deep red tux that looks classy and classic, I think you can pull it off.” Shirt shades offer less explorative territory. “Getting away from a white or light colored tuxedo shirt is always a little dangerous,” he says. “Certain staples shouldn’t be mixed with. Light pink or blue is not bad, but again, you’re just breaking from a classic.”

Fight the tennis shoe temptation
“As tempting as it seems to wear tennis shoes with your tux, don’t do it,” Feig warns of the old sneaker spin. “I think it looks ridiculous. If you’re 14 years old, maybe give it a shot. In general, don’t portray anything that says ‘I’m too cool and I don’t care.”

Have fun with the little things
Feig likes to think of the red carpet as a place to let the ladies shine. “For men, there are little things you can play with,” he says. “My advice for putting a spin on something is your pocket square. That’s where I personally feel you can have your fun.” Feig rocked a series of pink pocket squares throughout Bridesmaids’ award season. Other places he approves of tweaking: lapel size and style, bow tie size, cuff links and studs.

Leave one thing a little awry
Celebrities are, in fact, humans, and Feig says their red carpet look should reflect that. “You need to have one element about your outfit that is imperfect, that says you live in it and you’re not letting it control you,” he explained. “I think men and women both need a softness about them with formal wear. Men shouldn’t look like they’re super tightly put together.” For Feig, it’s all in the hair. “Once you’ve done everything, just run your fingers through your hair. It achieves a naturalness that feels real.”

How The Chinese Put the Squeeze On Hollywood