Home Celebrity From the Desk of Professor Kanye 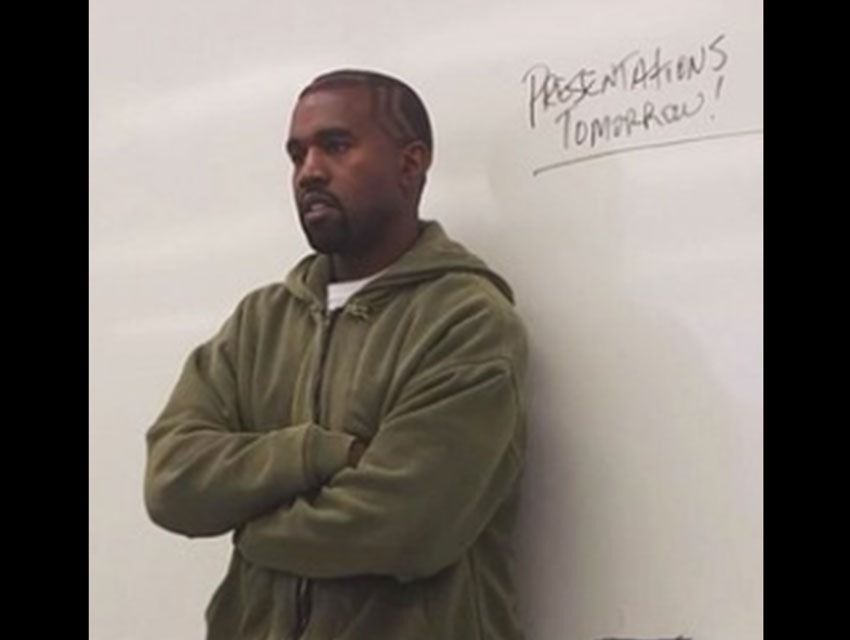 In July of 2013, rapper Kanye West attacked a paparazzo at LAX, which earned him 250 hours of community service. West has been shaving time off his sentence by teaching classes on fashion and design at the L.A. Trade Technical College, the most recent of which took place last Friday. Ye took the classroom floor for nearly two hours to discuss style, art, and music, although, according to one student who was present for the lecture, “he didn’t teach us specifically anything.”

Comprised completely of real things he’s said in the past, we’ve devised a sample curriculum should he ever abandon his post as a god and take up the humble calling of full-time professor.

B. COURSE DESCRIPTION: I’m a creative genius, and there’s no other way to word it. For me to say I wasn’t a genius, I would just be lying to you and to myself.

C. COURSE OBJECTIVES: Believe in your flyness, conquer your shyness.

Week 2: Nudity: The Intersection of Fashion, Religion, and Law
I want to stop using the term ‘fashion’ because Eve made Adam bite an apple, and since then, it’s been illegal to be naked. I’m helping people follow the law in style.

Week 3: Fashion Plagiarism: When Your Ideas Hit Someone Else’s Runway
We brought the leather jogging pants six years ago to Fendi, and they said, ‘No.’ How many motherfuckers you done seen with a jogging pant?

Week 5: Aspiring to Success. Or, The Power of Jordans, Part 1
No one can say I cannot design or understand how to design a guy’s sneaker. When I was in fourth grade I was drawing Jordans when my mama couldn’t afford them. Getting kicked out of class for drawing them.

Week 7: Solid Ideas (and Solid Credentials!) are the Keys to Creativity
I’ve got ideas on color palettes. I’ve got ideas on silhouettes. And I’ve got a million people telling me why I can’t do it. I’m an artist. I went to art college.

Week 9: The Paparazzi: A Primer
You do help me get money, paparazzi. You help me show people how fresh my outfit is, and that helps me influence people.

Week 10: Designing for Your Own Tastes
This sweater is dope as fuck. That’s like some shit I would wear to the airport.