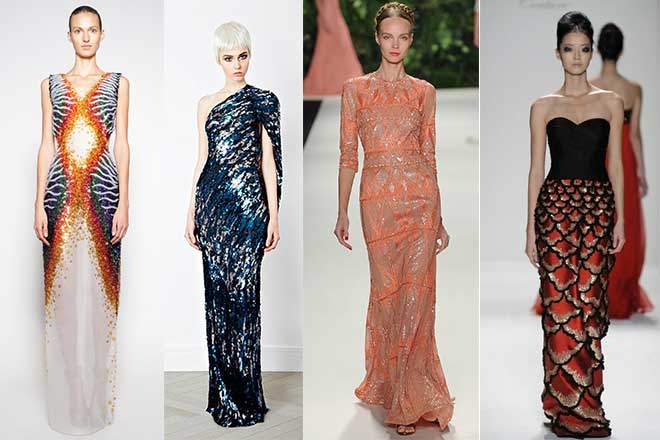 You often hear the same roster of designer names being dropped on the red carpet—Versace, Prada, Dior. And we’re not complaining! When the right dress is on the right lady, we swoon. But there are a few names we wish we’d hear more. We featured gowns by Mathieu Mirano and Farah Angsana in our spage-age fashion shoot last year starring the Sundance Channel’s Push Girls. And dresses by both Talbot Runhof and Naeem Khan were showcased in last year’s spring fashion shoot starring New Girl‘s Hannah Simone. Needless to say, we’re fans of those designers! They aren’t total strangers to dressing celebrities—Naeem Khan is probably the most veteran red carpet-outfitter on our list but we can’t get enough of his otherworldly work, like the space priestess number we featured in a caftan round-up last summer. Miley Cyrus and Carrie Underwood have both rocked gowns by Farah Angsana, and Underwood wore a Talbot Runhof creation when she hosted the CMAs. (Amanda Seyfriend wears the designer on the cover of a recent Elle Hong Kong). For his part, Mathieu Mirano has worked closely with Lady Gaga. We love to hear other favorites like Zuhair Murad and Project Runway winner Christian Siriano are becoming red carpet staples, and hope this batch follows suit.