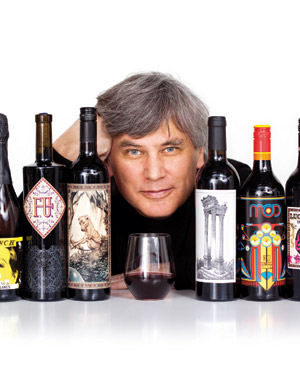 Chalice of malice: You would expect a sparkling wine called Punk Bubbles, emblazoned with the tag line “Stench” or “No Future,” to be a gimmick. Not so, insists Dan Philips, who wants to shake the wine industry out of its “boring and conservative” traditions. He is best known for founding the Grateful Palate, a catalog and Web site that specializes in obscure artisanal foods. He started R Wines to import, market, and even produce the drink that has obsessed him “since I was a preteen.” Booze makes news: Longitude, a red whose geographic origin (but not its name) is etched on the bottle, earned 100 points from critic Robert Parker in 2005. The 10 Second shiraz will be adorned with 240 different labels by artist Geoff McFetridge to create a flip-book animation effect when the bottles are lined up. Reverse psychology: Philips draws from his background as a film and TV producer as well as from his lineage (his father was a psychiatrist). “Sales is about psychology, how to get people excited,” he says. “Most people who make wine make it and then try to see how to market it. We come up with the idea”—an inebriant called Bitch, for example—“and then figure out how to make it.” » R Wines is available at gratefulpalateimports.com.