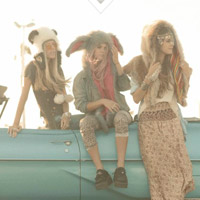 WHAT: Spirit hoods are those furry animal-head hats with dangling forearms that hang down around your ears. These pseudo Native American hoods are more commonly seen on hipsters at Coachella and atop the hairless heads of infants (wearing a matching onesie). The L.A.-based company SpiritHoods creates faux fur wolves, foxes, pandas, rabbits and bears. Each comes with a description of the animal’s  characteristics— and it’s sort of  implied that the wearer will somehow embody these traits. I tried the NightHawk shawl. Let’s see what my colleagues had to say…

Editor 1: So Game of Thrones! Bring it!

Editor 2: Who-hoo can pull this off?

Editor 3: There’s a fetish in there somewhere…

Verdict:  Hmmm, this is a tough one. I know on some level the concept may be offensive to indigenous people.  Also, some of the hoods are just downright silly—unless you are 5 years old, then a floppy-eared rabbit hat is adorable. If you are over 5 years old, maybe you could get away with one on the Playa at Burning Man, where anything goes. But the faux fur was so soft, AND if it wasn’t called a “SpiritHood” it  probably wouldn’t offend anyone. I wore the shawl to a fashion event to see what other people thought, and it was pretty well received, no one even got the animal connection. So, bottomline: I would wear one of the hoods/shawls (that didn’t have ears or pronounced paws)— but never to Coachella.