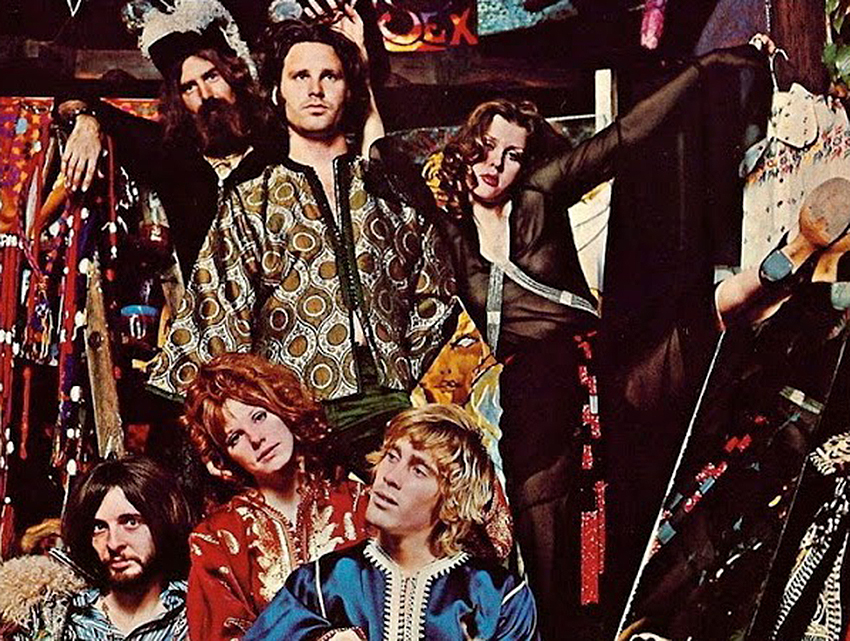 San Francisco might own 1967’s Summer of Love, but L.A.’s trippy season went on long after that–just like its eternal sunshine. The late ‘60s here saw love-ins in Elysian Park, acid tests in Watts (presided over by Merry Prankster Ken Kesey himself), and an explosion of Hollywood nightclubs such as The Trip, The London Fog, Thee Experience and The Galaxy. Thanks to the boutiques around the Sunset Strip that had their own thriving scenes, the crowds at these hot spots were dressed just as exotically as rising stars like Love and The Doors.

The recent “Hippie Chic” fashion exhibition at Boston’s Museum of Fine Arts spotlighted some of L.A.’s key shops from the era, including Themis, the store Jim Morrison funded for his girlfriend, Pamela Courson, on La Cienega just below Sunset. Named for the Greek goddess of divine order and decorated with peacock feathers and tie-dyed tapestries, it carried elaborately embroidered caftans and furs from India and the Middle East, vintage deco from the ‘20s and ‘30s, and cutting-edge local and European designers that Courson sourced on trips to Paris. Morrison described her wares as “weapons, ornaments and protection,” and their clientele included Miles Davis and Sharon Tate.

Morrison himself was a walking advertisement for Mirandi Babitz, a friend of Courson’s who had her own boutique on the Strip. The sister of scene chronicler Eve Babitz, Mirandi made The Lizard King’s now-iconic leather pants; unfortunately these skins couldn’t protect him from himself. After the singer’s untimely death in 1971, Courson returned from Paris and drove a van through the front window of Themis; that was the end of her foray into fashion.

On the lighter end of the spectrum was the Dutch art collective The Fool, who came to L.A. in 1968 and painted the town red, blue and every shade in between. Best known for their wild murals and clothing collections for the Beatles’ Apple boutique, the foursome’s first big gig was painting the Aquarius Theater for the L.A. production of Hair. Now the home of Nickelodeon, the building lit up Sunset with its dancing muses and astrological symbols. Former Fool member Marijke Koger-Dunham, who has lived and worked here ever since, remembers it being a crowd-pleaser. “Everybody was into stars and rainbows and happiness, it was just the zeitgeist,” she says.

Koger-Dunham brought a cosmic sensibility to two L.A. fashion lines: Astraflash, youthful knits sold at Macy’s and Orbach’s, and the more high-end Summer Sunday, which was carried by Saks and Henri Bendel. Raquel Welch wore a prismatic Summer Sunday gown in the pages of Vogue.

In 1970, after The Fool split professionally, husband-and-wife team Yosha Leeger and Barry Finch opened The Chariot boutique on Melrose, named, like the collective, for a card in the tarot deck and easily spotted with its mural of clouds and white neon trim illuminating the window. Inside, a rainbow desk and furniture coordinated with the clothes, which included selections from Astraflash, handmade pieces, and Leeger and Finch’s own Cosmic Couture line.

A velvet Cosmic Couture minidress with acid-hued ombre sleeves and a celestial motif on the bodice was the centerpiece of the “Hippie Chic” exhibition, the first garment you saw upon entering and prominently featured in the catalog. Curator Lauren Whitley reveals that the source of this rare find was none other than the Melrose vintage institution Decades. “I’m not surprised that this was found in L.A.,” she says. “You can get away with things in the sun and the warmth that you couldn’t get away with on the East Coast.”

That remains true today. Koger-Dunham, who still infuses her art with mystical intentions, says she’s noticed the rise of a new cosmic generation. “It’s more varied, but there’s a whole group of young people getting into it again.”

Steffie Nelson is a freelance style and culture writer living in Echo Park. She is working on a book about cosmic Los Angeles. Read more of her work or follow her on Twitter

The People and Things That Defined the Decade in L.A.

Awards Season Is Over. Now’s Your Chance to Snag Celebs’ Cast-Off Loot