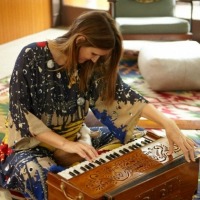 Resurrection, the bi-coastal vintage boutique that Katy Rodriguez founded with her partner Mark Haddaway, just celebrated its 18th birthday. During those years, Rodriguez launched her own clothing line, co-curated a collection of rare 20th century fashion auctioned at Christie’s, and discovered meditation through the Self Realization Fellowship—a personal shift that’s been reflected in a new cosmic design direction. Here, she talks about the influence of her spiritual practice on her vision and business.

How has meditation changed your approach to work and life?
I’ve done hatha yoga off and on since the ‘90s, but four years ago I got more into meditation, and that type of practice is a whole way of being. In Self Realization they talk a lot about the worldly life and the spiritual life, and I became more concerned with my spiritual life. That was the beginning of being honest, admitting that I don’t like [fashion’s] rules and seasons; luckily I have a store so I don’t have to play by those rules. Around that time I started working on some of the more cosmic stuff. Everything was soft, printed, kind of floaty and with really bright colors. Then I started getting into antique sari fabrics and gemstones. It’s not like I wanted to hit people over the head and put an om symbol; I wasn’t going to make yoga clothes.

You created a print called Galaxia, and you have a brand-new Moon skirt. Is the cosmos a direct inspiration?
How can you not be completely mesmerized by looking at images of outer space or trying to get some grasp of what that means? But I think it’s more of a metaphor for the infinite, and that’s a way of describing it visually. For me the Lotus collection, made from antique Japanese obis, is also an extension of that. If I look at something like the Lake Shrine [at SRF] and try to get that essence it’s the same thing. It all comes from the same place: wanting to create something beautiful.

How did the citrine pendant carved with the image of Yogananda come about?
I have a friend who has things carved in Bali, and she asked if I wanted to send something over. I basically used the classic portrait, and the color symbolizes the robe, that very Indian color. To me that’s true inspiration: When you’re a creative person those things are moving through the air and you just grab onto it and make it into a tangible thing. The jewelry has always been connected to my spiritual journey.

You’re a real lover of L.A. history. How has the city’s cosmic side fed your imagination?
Yogananda came here in the 1920s and I believe that’s the reason L.A. and Southern California is the way it is, from vegetarianism to yoga. We have temples all up and down the coast. There’s a famous surf spot in Encinitas called Swamis . All the people I love, like George Harrison and even Lux Interior and Ivy from The Cramps, were Self Realization people, and all of our gurus are on the cover of Sgt. Pepper’s. I’ve been staring at that album my whole life! It’s there and it’s around—it just a matter of how much you tap into it.

All photos in the slide show above courtesy of Katy Rodriguez

Steffie Nelson is a freelance style and culture writer living in Echo Park. She is working on a book about cosmic Los Angeles. Read more of her work at steffienelson.com or follow her on Twitter at twitter.com/steffienelson