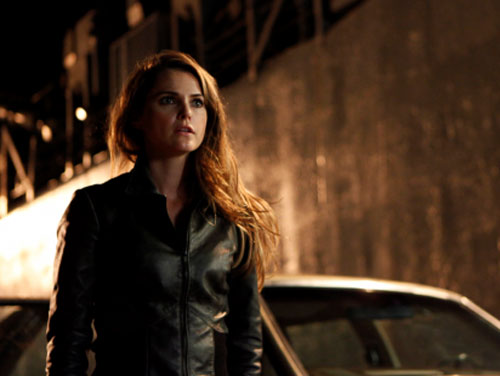 We have the 1980s to thank for neon bodysuits, mesh tops and leg warmers, but none of the decade’s most garish garb play a role in The Americans, which follows the lives of undercover Russian spies Philip and Elizabeth Jennings. Average Americans by day and KGB agents by night, the couple hides their identities from their kids and the FBI with the help of wigs, trench coats, and unassuming glasses. The Americans’ returned to FX with the premiere episode of its third season last night, and when Elizabeth wasn’t grooming her daughter to serve Mother Russia she was fighting FBI agents—all the while maintaining a pretty sophisticated style.

More Nancy Reagan than Madonna, Elizabeth’s taste doesn’t distract from her proclivity for violence, and REDValentino’s Leather Bomber Moto Jacket has both her elegance and ferocity. The jacket’s trapunto shoulder stitching gives a feminine touch to black lambskin leather and zipper pockets. Paired with diplomatic dresses, it’s dressing to kill.