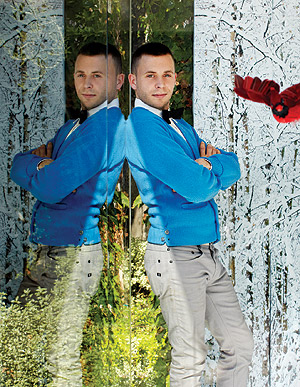 Walk the line: Creating retail display windows that grab attention is “a delicate balance between being controversial and turning people off,” says ChadMichael Morrisette, who operates SquareDesigns out of his backyard workshop. Naked ambition: For an homage to Helmut Newton, he glued a strip of “hair” on a nude female mannequin at the West Hollywood men’s store Alpha. Less lurid installations include the white owl with a 12-foot wingspan he made for a Sunset Strip jewelry store (his big break), using feather boas attached to cut-up baskets—and no baubles: “I rarely like to see merchandise on display. The window has to have a life of its own.” Runaway success: Morrisette left his Alaska home at 15. His career began in 2005 with cold calls to L.A. boutiques. Props can come from a 99 Cents Only store or a taxidermy shop. Once he plundered his dentist’s office for a theme on dental phobia, commissioned by—of all places—a gym. He stamped bloody handprints on walls and set up an X-ray machine. “But the mannequin,” he says, “was in DSquared2clothing.” » To see Morrisette’s displays, go to iamsquaredesigns.com.