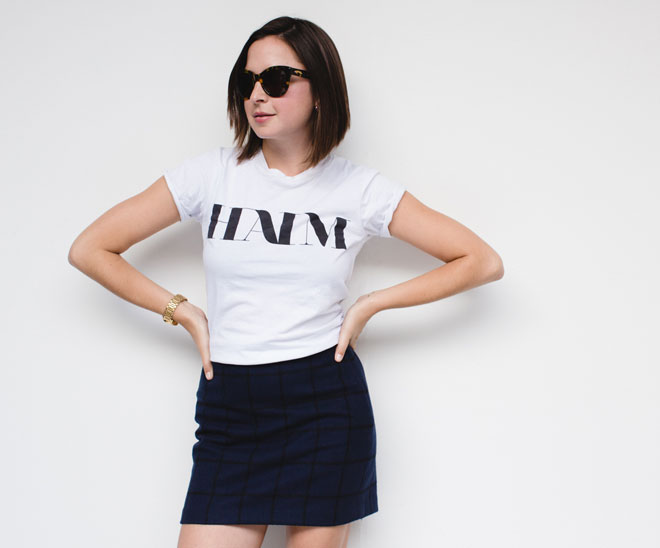 Elvis Costello was my first concert, and I allegedly wormed my way in. I’m told my three-year-old self threw a pretty wicked temper tantrum until my mom, who was headed to see Costello, decided it was a bad idea to leave me alone with my grandmother, and I got to go with. A few years later, the Bangles became the first band I requested to see. My mom happily obliged, and what I remember from the experience is dancing in the aisle—hard—and connecting to the music in a way that made it feel special to be a girl.

In High School I got into Luscious Jackson and TLC, but it had been awhile since my girl band itch had been satisfactorily scratched. That is, until L.A.-based sister group Haim came along. I played their two singles, “Forever” and “Falling,” to death before the group’s album came out last month, and I’ve been making a broken record of it since. Last Wednesday, my husband, our friend Allen, and I caught the band at the Fonda Theater in Hollywood. It’s an intimate venue, and it was one of those shows I know I’ll remember fondly when the act inevitably moves on to playing bigger stadiums for bigger crowds and bigger bucks.

The sisters killed it. Each of us—a woman, a straight dude, and a gay guy—were a little turned on by how hard Haim rocked out. They didn’t act jaded or complacent by their recent success; they seemed as genuinely stoked to be there as the fans were. They even stopped in the middle of their set to take a selfie.

The most fashionable part: the group nailed it in the merch department. Pairing a concert tee with a pencil or mini skirt is one of my go-to outfit ideas these days, so I’m always on the prowl for new ones to add to my evolving collection, which I hope becomes the kind that my future daughter will beg to borrow from. I was disappointed at the Alt Jay concert when the rough-to-the-touch bootleg shirts sold outside after the show were way chicer than the ones the band was shilling inside. Although I was initially excited that Vampire Weekend put lacrosse sticks on their tops (what East Coast girl worth her salt doesn’t love a little LAX?) my excitement turned to disappointment when on closer inspection it became apparent the shirt looked like something from Abercrombie and Fitch. If irony was intended, it came across as kitsch. Leave it to the ladies to get it right. All three of the tees for sale at Haim’s show were cool enough to be worn by Este, Danielle, and Alana themselves. I bought a basic white version with the signature Haim logo on front, perfect to rock with everything. The tour dates aren’t listed on the back, but when it comes to fashion there’s nothing wrong with keeping it classic.