Home Uncategorized Breaking Badass: How (And Why) Our Style Editor Became Heisenberg 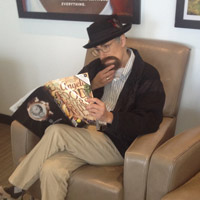 Where the hell did you get this idea to dress as Breaking Bad’s Walter White/Heisenberg?
A:  I was a late bloomer to the whole Breaking Bad phenom, but when I got hooked, I got all meth-y about it. I’m talking holing up in my bedroom until 3 am clicking “play next episode” on Netflix. I caught up on 4 seasons in almost as many days. Walter White’s transformation blew my mind. I knew I wanted to be Heisenberg for Halloween the minute I saw him. But truthfully, the idea to also go as Walter came from these stuffed dolls. The one of him in his underwear made me nostalgic (that’s when he first broke bad!) and since I had multiple parties to go to I decided to follow the character arc and morph from pilot episode Walter White for the KCRW masquerade ball and become full Heisenberg for the LACMA ball tonight.

There’s this notion that women use “sexy” themed Halloween costumes as an opportunity to dress trashy. You went the other route—very risky. Is this a response to that trend?
A:  This was absolutely my protest against sexy costumes. My Occupy Sexy Halloween. You don’t have to flash cleavage to get attention, being creative and ballsy gets way more attention. I even won a few costume contests (scored gift cards and two free car washes, very fitting for my character, right?). People called me terrifying, disturbing, and unrecognizable— and isn’t that what Halloween is all about?!

What were the key pieces that made Walter White and Heisenberg come to life?
A: Walter:  green button down shirt (borrowed from my roommate) and tighty whities (took me three stops before I found them at Rite Aid, size small). Heisenberg: it was really all about the black pork pie hat, it had to be THAT hat, it’s Walter’s superman cape. Luckily, I covered Best Halloween Costume Shops in our October issue, so I knew where to go to get all the stuff.

Which look is your personal favorite—WW or Heisenberg?
A: That’s tough. I didn’t see any other pilot episode Walters so that made me feel totally cool, but Heisenberg, made me feel so badass. When I put on that pork pie…I became the danger, the one who knocks.