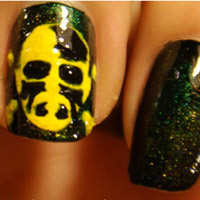 I’ve recently joined the ranks of those obssessed with Breaking Bad. I arrived very late to the heart-racing- slightly depressing-but infinitely compelling-dramatic party. I tried to watch one espisode when it first aired and it just didn’t appeal to me, but after hearing constant kudos dished out to the show by staffers in our editorial meetings, I decided to give it one more go.  “Watch at least three episodes before drawing any conclusions, ” advised a few co-workers. This time, I got about 15 minutes into the pilot and was hooked. And thanks to Netflix I spent most of the last two weeks catching up on the last four seasons and the Season 5 premiere—marathon style.

Now, I spend a lot of time Googling “Breaking Bad” —unlike the show’s creator  Vince Gilligan who never has.

Here are a few gems I uncovered:

The show’s costume designer Kathleen Detoro brings us behind the scenes for a look at the baddest fashion in Breaking Bad. Read about the origin of Heisenberg’s pork pie, and how all of Wendy’s clothes were stolen after the first season.

I love these paper dolls by  Kyle Hilton at Flannel Animal Walter White, with cell phone (one of two) and optional hair.