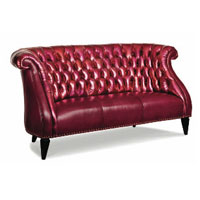 Drawing on the Oscar buzz surrounding My Week with Marilyn, Hancock & Moore just announced a line of Monroe-inspired furniture.

The “Exquisite Sofa” a tufted magenta leather loveseat took cues from the iconic scene in Gentlemen Prefer Blondes where Monroe croons “Diamonds Are a Girl’s Best Friend” while slinking down red-carpeted stairs.

And the “Flirt Chair” made of liquid-gold Gayla Gilt leather pays homage to the sex symbol’s shapely curves and the Golden Globe she won in 1960 for Best Actress-Comedy/Musical in Some Like it Hot. The actress was never nominated for an Academy Award, but on Sunday Michelle Williams gets a shot for her portrayal of the troubled star.