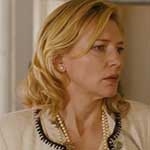 Cate Blanchet scored a Golden Globe nomination for her role in Woody Allen’s Blue Jasmine. In the film she plays the title character, a spoiled trophy wife whose husband (played by Alec Baldwin) lavishes her with riches—until he’s arrested for a ponzi scheme and sent to prison. Jasmine loses everything. Well, not quite everything. She manages to squirrel away enough designer pieces before the Feds can get their hands on them to make her the best-dressed homeless woman you’ve ever seen muttering to herself on a park bench. Costume designer Suzy Benzinger’s biggest challenge was aquiring Blanchett’s luxury label-heavy wardrobe within her given budget. She borrowed most of the pieces from designers but had to rumage racks at discount stores like Loehmans for a strapless Valentino gown and Century 21 for a deeply discounted Marc Jacobs trenchcoat. Jasmine’s signature boucle Chanel jacket, however, was custom made by Karl Lagerfeld himself. She clings to that jacket like a life preserver. She also kept loads of Prada dresses, Chanel pearls, custom Roger Vivier flats, her Louis Vuitton monogrammed luggage set, and a Hermès “Birkin” handbag. The lesson here? Invest in a few luxury items. If you’re ever down on your luck you just might find some solace in Chanel.

Don’t have the extra moola to drop on an LV luggage set but still want to look like a million bucks? Check out our Sartorial Sleuth’s post on where to score Blue Jasmine looks for less in L.A.