Home Uncategorized Annie Get Your Gun 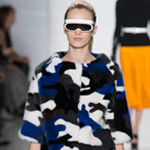 It was around the time that naval ships armed with nuclear missiles anchored near Syria, when for a moment it seemed as if the US was going to war, that I started to notice a lot of people in L.A. wearing camouflage clothing. At one party I spied a gentleman wearing a camo bow tie, another with a blue hued camo button down, a woman in hidden platform camo sneakers. I knew from the fall runway shows that camo was set to be big (again) this season and even into spring, but truthfully, I wasn’t so sure people would respond to it. Not after a year of occupy movements and global protests. It’s not the first time we’ve seen camo on runways, a couple years ago it had a moment. When did camo first jump from the trenches to the catwalks? Was it fashion being subversive? The military look has been in style since the peacoat, so maybe this was fashion’s way of creating a stylish militia? I started asking way too many questions about the camo trend. So, being a journalist I set about looking for answers on the all powerful and wise internet. After a bit of digging I found a few interesting links on designboom.com, time.com, and a particularly insightful piece on washingtonpost.com which I  used to create this little timeline:

And after that, camo went mainstream. This year dozens of brands featured camo and Michael Kors, Christopher Kane, DKNY, Rebecca Minkoff, Perry Ellis, Patrik Ervell, and L.A.M.B. all had camo looks in their collections. Denim companies took note and released camo printed jeans, and there are a ton of shoes (Alexander Mc Queen, Sperry Topsider) and accessories with camo patterns like handbags from Valentino and Proenza Schouler.  So why camo?  Is it political expression? Is it rebellion? In the washingtonpost.com piece Daniel James Cole, professor of fashion history at the Fashion Institute of Technology says camo is “part of regular fashion vocabulary now because it looks cool. That’s the bottom line. A lot of writers are constantly trying to create a sociological correlation. But at the end of the day, we’re attracted to the look.”

Well, there you have it. It looks cool. Still, I think there must be a reason…Check out the slide show above for a sampling of camo looks