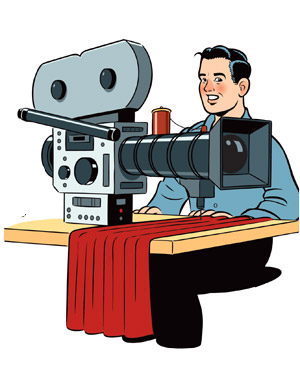 With framed movie posters leaning against the wall and scripts neatly stacked on desks, the Fairfax District office of Thousand Words, the production company behind indie-film hits Religulous, Requiem for a Dream, and Waking Life, looks pretty much like any other. Except for all those clothes. Racks hold slimmed-down cargo shorts, T-shirts displaying reverse-negative nature graphics, and blazers with patched elbows. The garments aren’t costumes for an upcoming show; they’re samples for the debut collection of Aether, a line that cuts performance textiles such as nylon and water-repellent cotton into urbane silhouettes. Palmer West and Jonah Smith, Thousand Words’ cofounders, thought up the idea for the label after they outgrew sports apparel that was too bright or shapeless to wear to dinner with an actor or a director.

“Really, nothing” is how Smith describes the duo’s fashion experience before launching Aether, whose pieces retail online for up to $625 (aetherapparel.net). Every designer has to start somewhere, of course. “You call people, you meet people, you learn,” says Smith. “It’s just like producing a movie.” The company’s films, each made for less than $15 million, range in genre. “We make movies we want to see,” says West, who partnered with Smith ten years ago. “The same applies to Aether. We wanted to make a lifestyle brand that spoke directly to us.” One jacket detail is an interior pocket that lets a cell phone pop out with a tug of a strap. “You only need one hand,” says West. “If you’re skiing, you don’t have to take off your gloves.” Smith elaborates: “If you’re on a hill on a weekday and you want to hide that fact, you won’t miss your calls.”

Aether’s chances look promising; the fashion world hasn’t lost its crush on Hollywood. Besides the continued interest in celebrity-designed gear, there is also the critical success of Band of Outsiders, a line created by former CAA agent Scott Sternberg. That label benefited from plugs by Sternberg’s Industry friends, including actress Kirsten Dunst. West and Smith haven’t yet tapped any A-list pals to promote the brand. Instead they’re assimilating into the fashion industry by showing samples at trade shows. People in the apparel business are different from those in film, they have observed. How? West squelches a smile and, with classic Hollywood diplomacy, says, “We’ll have a drink sometime, and I’ll tell you off the record.”