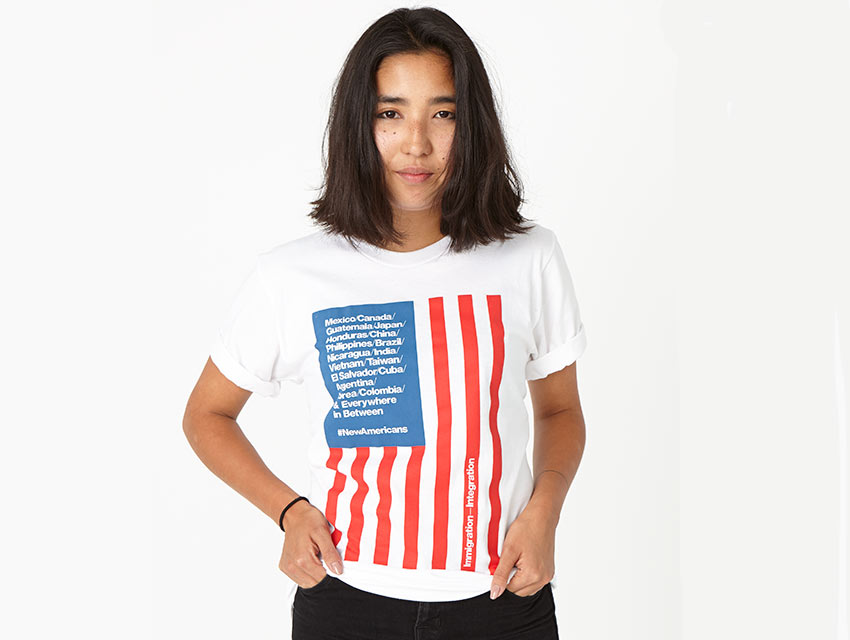 Even for a message tee, American Apparel’s new flag-embossed limited edition ‘Immigration Integration’ shirt has a lot to say. The style, unveiled today during an event at the company’s Los Angeles factory, will support the New Americans Opportunity Fund, which itself supports L.A.-based nonprofits working to help eligible immigrants obtain legal rights in two ways: 20-percent of proceeds from sales of the T-shirt will go to the fund while its design raises awareness for the cause (notice that #NewAmericans shout out on its front).

But the shirt (and a related billboard, below) does something else, too—it makes a statement about American Apparel’s politics and how the company hopes to be known in its post-Dov Charney era. New CEO Paula Schneider told Marie Claire last month that marketing plays a huge role in her plans to turn the company around. “We have to get past the idea that it’s just a clothing brand,” she said, “It’s not…We are the largest manufacturer of apparel in North America. I don’t think people know that. And that comes with a call to action—if we want to keep jobs in the United States, we have to make our product relevant for people around the world.” Hosting a launch party in the middle of the day attended not by “Instagram hoes” but rather by civic leaders like Linda Lopez from the city’s Office of Immigrant Affairs? That seems like a perfectly classy place to start.