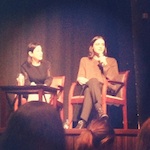 Presented by the LACMA Costume Council, Theory artistic director Olivier Theyskens sat down in conversation with Academy Award-nominated costume designer and stylist Arianne Phillips to discuss Theyskens’ evolution as a designer, mutual experiences being college dropouts and working with Madonna, and all things Belgian.

The pair goes way back, as is evidenced by their charming chemistry on stage. Phillips recounts the first time she was backstage at one of Theyskens’ show in Paris in 1998. “Olivier’s whole family and all his friends were there,” she said. “I was taking a dress for Madonna, and your father came up to me and said, ‘You better be careful with that dress.’” Theyskens laughed, noting how Belgian it is of his family to exude such pride and demand for respect.

Before they were a support system backstage, Theyskens’ family members growing up in Belgium and Normandy were very early encouragers of his taking to fashion.  His grandmother gave him her collection of sheets, black lace, pearls and buttons to play with as a child. “Every little piece of curtain, she would leave for me to play with,” he said. When he didn’t have the capital to purchase material, his grandmother sent those sheets over for him to use for his first collection—Barneys New York put in an offer on them.

Theyskens launched his own label in 1997 and gained international attention when Madonna wore one of his gowns to the 1998 Academy Awards. After closing his label, he worked as the artistic director for a number of brands, including Rochas, Nina Ricci and now, Theory.

Always self-reflective, Theyskens said he once stumbled upon a Tumblr blog a fan made with side-by-side images of his designs over the years and noticed for the first time how much his collections were connected across seasons. “I saw things coming up over and over—lots of lace, tough girl attitude,” he explained. “When you work in fashion, you think ‘change or die,’ but I like to see things from the very beginnings,” and have collections evolve from one to the next like stories.