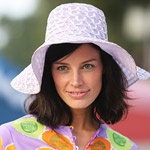 Mad Men costume designer Janie Bryant is a genius. Not only have her clothing choices for characters ignited juicy conspiracy theories, her work on the show has influenced menswear in a big way—doesn’t it seem as though men started dressing better since the show aired? For years pocket squares languished at the bottom of sock drawers until Bryant flat folded one and stuck it in Don Draper’s suit breast pocket. Now, they’re a menswear accessory staple. We’ve been watching the costume choices on the show closely all season, check out the slideshow above for a handful of pieces we spotted that are already becoming trends this summer.