Home Uncategorized 5 Wes Anderson Creations We Wish We Could Buy 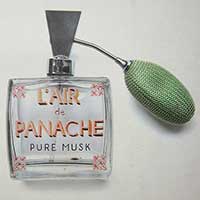 In Wes Anderson’s latest film, The Grand Budapest Hotel, the main character, a concierge played by Ralph Fiennes, is constantly spritzing himself with his signature cologne—L’Air de Panache. According to Vogue, the fragrance exists. Anderson tapped Paris-based perfume house Nose to create the scent, mainly to gift to the film’s actors. The director doesn’t intend to market the cologne (the parfumerie is offering samples on its website here), but this got us thinking: What other collaborations has Anderson missed out on?  Behold a wish list of items for the assembly line: Suzy Bishop’s Dress, Moonrise Kingdom
Seems like everyone wanted to be Suzy Bishop for Halloween in 2012 (check out these costume pics on Buzzfeed). DIY tutorials and patterns for Suzy’s Peter Pan-collar dress were all over the Internet back then, but Suzy’s retro wardrobe could have successfully spawned its own collection. Banana Republic could have taken it on (Lord knows they’ve collaborated with everyone from Mad Men to Bon Appetit). You can scour thrift stores or simply click through Etsy where knockoff styles abound. Louis Vuitton ‘Safari’ Luggage, The Darjeeling Limited
This custom set, embossed with palm trees, zebras, giraffes, and elephants, was created as a one-off for the film by Louis Vuitton. Sadly, after the film wrapped the pieces were sold at auction. Team Zissou Adidas, The Life Aquatic With Steve Zissou
There was such a demand for these sneakers that fans started an email campaign begging Adidas to produce them back in ’05. The company refused. You can still find replicas kicking around on Etsy and eBay. Richie Tenenbaum’s Vintage Vuarnet Aviators, The Royal Tenenbaums
Though this film kicked off a sweatband craze when it was first released, we think Richie’s vintage shades would have been a more stylish item to cop. Every so often a pair of Vuarnet PX-3000 Aviator VL1014 sunglasses pop up online, but sightings are far and few between. It’s been said that Anderson is a big fan of the French brand, so a collaboration would have been fitting. Max Fischer’s Blazer, Rushmore
A navy blazer will never go out of style and what says “Harvard is your safety school” like a Max Fischer Brooks Brothers blazer? Brooks Brothers collaborated with Academy Award winner Catherine Martin on Gatsby costumes so maybe a collegiate prep collection for Rushmore wouldn’t have been out of the question. For now, ladies can find one at ModCloth.