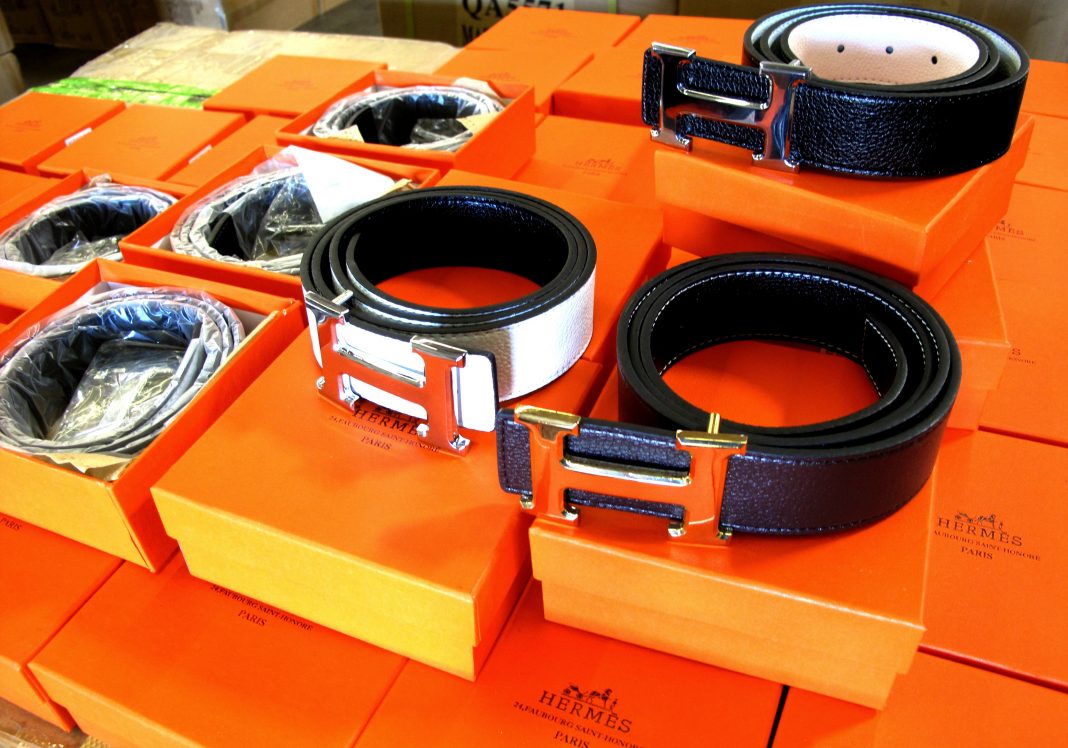 Last week U.S. Customs and Border Protection (CBP) officers in Long Beach seized a shipment of counterfeit Hermès belts worth $3.2 million. The cache of nearly 4,000 leather belts had come from China. They were listed as “plastic besoms” on the ship’s manifest to avoid detection. “These aren’t cheap knock-offs,” says Jaimie Ruiz, CBP public affairs director. “Anyone with an untrained eye would be fooled.” The belts are part of a new generation of counterfeit goods, offering much more convincing copies of products. The Hermès belts featured the French brand’s logo stamped into the back of the leather belts and engraved on the buckles. The belts even came in near perfect replicas of the company’s signature orange and black boxes.

“China is by far the biggest culprit in shipping counterfeit goods into the Long Beach seaport,” says Jeff DeHaven, Section Chief at CBP, Long Beach. “And currently, Long Beach is the most used port for counterfeit shipments in the whole of the U.S.”

With containers arriving every six seconds searching every vessel isn’t feasible. “If we halted trade to search every container the U.S. economy would collapse,” says Ruiz. The CBP has confiscated an abundance of knock offs of handbags and footwear pretending to belong to luxury brands like Chanel, Gucci, Louis Vuitton, Ferragamo, and Michael Kors. The largest bust in recent history at the Long Beach seaport involved counterfeit Hermès handbags with a domestic value of $138 million plus. The CBP enlists an outside contractor to destroy all of the fakes they’ve seized.

“There’s this perception that the sale of counterfeit goods is a victimless crime,” says Ruiz. “But counterfeits cost a lot when someone buys them. For one, sales aren’t taxed, which means no revenue for schools, roads, or hospitals. Also, we know the revenue for many of these products is going to transnational terrorist groups. The money is going to fund our enemies. And if you were to see where these fake goods are made, you’d be horrified—they use child labor, unsafe chemicals.”

Ruiz implores shoppers to pay attention to three things when purchasing a luxury product— where you’re buying it from, how much you’re paying for it, and if it comes in packaging? “Most counterfeiters don’t pay attention to packaging,” says Ruiz. “And when you buy online, you can’t be certain where those goods came from—it’s buyer beware.”

A big part of the problem though is convincing people to stop purchasing knock offs. “People want to walk around with an object that gives them high fashion status,” says Ruiz. “Counterfeits are shiny and attractive, but they have a dark side.”

Fine China for People Who Don’t Like Fine China