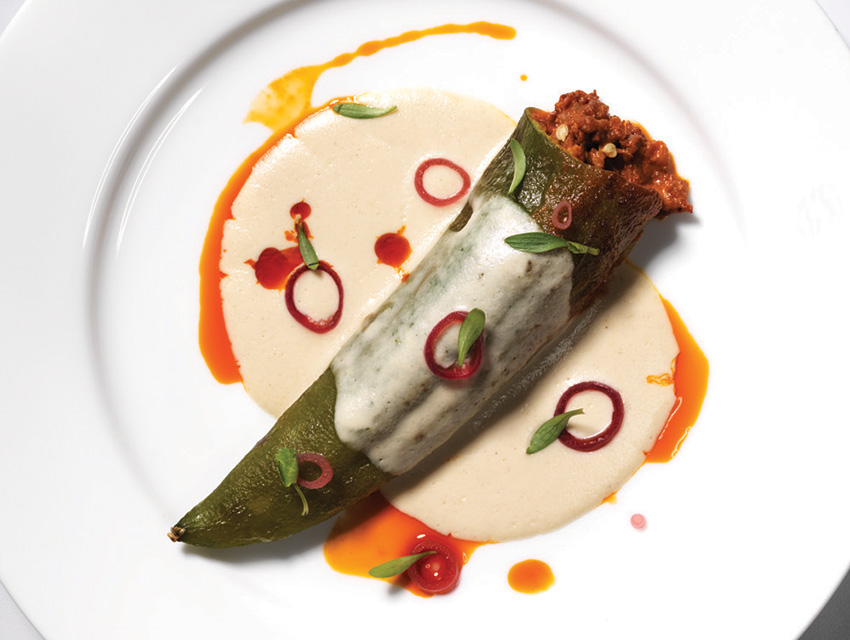 This year L.A.’s freshest culinary stars dug down to their roots, introducing diners to Singaporean laksa, Peruvian ceviche, Israeli shakshouka, and meatballs like Nonna used to make. Add to that a swank seafood shack and the dramatic debut of one of reality television’s most exciting innovators and you’ve got the city’s most appetizing arrivals Arid, windblown, with the scent of thyme in the air, southern Italy is hardly what anyone would call bountiful. Instead of the buttery prosciutto, thick cream, and perfumed truffles of Piedmont and Emilia-Romagna in Italy’s prosperous north, below Rome that which is good must be coaxed from an unyielding landscape. What’s evolved is a direct cuisine built on potent flavors. A basement dressed in Edison bulbs and rough-hewn wood, Zach Pollack and Steve Samson’s Pico Boulevard restaurant channels a bedrock belief that glorious rewards can be drawn from the region’s spare larder. The pair, who worked together at Grace and O.C.’s Pizzeria Ortica, are completely attuned to the sensual austerity this food demands. The wild fennel minestra—freighted with greens and Calabrian chiles, a fried egg its sole protein—could be the breakfast of shepherds in Padre Padrone. Blistered Little Gems, a salad finished with pestle-pounded anchovies and garlic, veers toward modernity without straying from simplicity. The wine list that wends its way around the heel of Italy complements the food at every turn. A flinty Puglian gravina bianco cuts through the luxuriance of the grilled mackerel that’s accompanied by seared cauliflower and cured lemon scapece; a deep-colored primitivo adds a hearty counterpoint to the crackling on the signature pork belly porcetto that’s served with a few lightly dressed wild greens. The dish is a lyrical example of how Pollack and Samson are able to transform the cuisine’s indispensable modesty into moments of delight. In an age of more, Sotto is a timely reminder of the power of less.

THE ROYCE AT THE LANGHAM The dining room at the Royce

A long-needed renovation at the Langham Huntington, Pasadena’s finest hotel, recast the dining room from a windowless wood-paneled box into a shimmering chamber with soft-white decor and a sweeping glass wall that looks onto rolling lawns. Elegant but inviting, the space nicely suits chef David Féau’s French cooking, which is both classic and modern. Féau, who came up through the kitchens of Guy Savoy, revels in nuance. He’ll counter the richness of foie gras custard and sautéed foie gras with a rustic buckwheat crepe and contrast marbled hunks of wagyu with dabs of salt herring served in a spot-on sauce poivrade. Féau even displays deftness with his vegetables, rolling salsify batons in leek ash and illuminating them with Cajun spices. Taut, contemporary, necessary, with a wine list that is among the most comprehensive in Los Angeles, the Royce shears a layer of excess off high-end dining, reclaiming it for our times. There’s a do-or-die bravado at work here. Jordan Kahn sics himself on Vietnamese cuisine, combining lime, fish sauce, and a floating market’s trove of herbs with a bag of tricks learned while he was a pastry chef for Thomas Keller and Grant Achatz. Whether an interpretation or an homage, his dishes hum with creativity. Leaves of verbena meringue soften the flavors of sugarcane-cured trout. Rendered Chinese sausage—almost toffeelike—whips around the char of seared savoy cabbage that’s been deglazed with fish sauce. Congee packs comfort and complexity when mixed with garlic chips, black malt, and uni. The tumbler layered with chicory, coconut bavarois, peanut croquant, and basil captures the spirit of Vietnamese iced coffee. Kahn’s not above yielding to tradition, but his food rings truest when he arrives at a dish through his own sensibility. Hovering above Sotto along an innocuous block of Pico, the new spot from Ricardo Zarate is more than an upgrade of Mo-Chica, his outstanding Peruvian counter south of downtown; it’s an evolution. A trained sushi chef, Zarate telegraphs the Peruvian pantry’s mountain grains, tubers, and heirloom corn varieties through the crystalline Japanese aesthetic. He adds moist chunks of slow-cooked pumpkin to quinoa stew, finishing it with just enough Parmesan to focus all the flavors. Snow crab fortified with spicy huancaina sauce plays off the earthiness of the potato causa square on which it sits. Choclo, or crunchy dried corn, is folded into fiery leche de tigre (citrus marinade), cubes of sweet potato, slivers of sea bass, and strands of seaweed for the city’s definitive ceviche. Presented on a wooden platter, the $72 rib eye—rubbed with spices and then charred—may be showier than anything the 38-year-old chef could do at Mo-Chica, but it’s a celebratory dish that brings together the whole table The tamarind-rubbed pork belly bánh mì Bryant Ng offers at lunch is modeled on the slaw-laden No. 19 pastrami sandwich at Langer’s; he essentially takes French colonial influences reformulated in Southeast Asia, refracts them through a MacArthur Park deli, and serves them in Little Tokyo. Duh. Before opening the Spice Table in a onetime brothel where birdcage chandeliers light the brick walls, the Boulud-trained L.A. native worked at Campanile and was the opening chef at Pizzeria Mozza. Ng does a legit version of laksa, a blazing hot Singaporean seafood stew with rice noodles and strands of fish cake. He also knows his way around almond wood embers, bringing out notes of lemongrass and galangal in the tasty satays and smokiness in the bok choy finished with oyster sauce. A special of Niman Ranch pig’s tail—braised to softness before being caramelized over a fire and served with lettuce cups, a platter of mint stems, and fish sauce—is a seamless dish of stunning integrity. The traditional fatoush salad—crisp pita chips among Little Gem leaves that are bathed in a lively sumac vinaigrette—places you on the Beirut corniche; the farm egg shakshouka, its soft yolk running into simmered tomatoes, onions, and bell peppers, transports you to the waterfront of Tel Aviv. Chef Micah Wexler, an alum of Vincenti, Craft, and L’Atelier de Joël Robuchon, casts an eye over the eastern Mediterranean in a panoramic survey of dishes that stays remarkably true to each. Once ascetic, the former Sona space has been warmed with earth tones and rope-upholstered chairs, creating an understated backdrop for Wexler’s explorations. Braised lamb shoulder with smoked green wheat and dukkah spice brings out the plumminess in the meritage from Lebanon’s Chateau Kefraya vineyard. For a hit of pure yiddishkeit, order the flatbread—pulled straight from the hearth before being schmeared with lebneh and dotted with caper berries and draped with smoked sablefish.

SON OF A GUN The communal table at Son of a Gun

Jon Shook and Vinny Dotolo earned their stellar reputation with Animal, a casually spare room where they injected mirth and irreverence into the nose-to-tail discussion. At Son of a Gun they’ve swapped out the protein and broadened their source of inspiration, channeling those hoary coastal dives with a Miller Lite sign buzzing in the window and killer seafood in the short-order kitchen. Adorned with potato chips, plump browned rolls bulge with lobster. Plates of sliced Benton’s country ham arrive heaped with warm corn bread and honey butter. Alligator schnitzel is topped with hearts of palm slaw that’s shot through with a Myers’s Rum sauce. Don’t let the ship wheels and netting and seaside knickknacks on the walls fool you: They’re not just kitsch; they’re a tip of the toque (or trucker’s cap, at least) to an increasingly rare type of restaurant where nothing gets gussied up. Let’s face it, any chef can throw together a bunch of ingredients and claim creativity. Ultimately what sets the most talented apart are obsessiveness and craft. Though the sense of entitlement is high in Michael Voltaggio’s muted gray cavern (the staff can get huffy if you order fewer than four dishes per person), a low-key artistry keeps most pretensions in check. Those croutons of black sesame brioche, dabbed free of grease by a cook behind the counter, add a perfectionist dimension when scattered over the small plate of tuna tartare. The crackly mushroom chicharrón tossed over the seared avocado traps notes of undergrowth in a puff of air. Voltaggio is prone to overuse the chemistry set (a soy gel might as well be a salt lick). But simply dressed kale chiffonade with pumpkin and burrata showcases his more restrained side, while the blowtorched dollops of maple foam crowning the chicken with waffle reveal the searching hominess of his cooking. Kris Morningstar sears his scallops so deeply, they acquire an almost meaty intensity that’s set off by a garnish of mushroom-strewn grits. His lamb’s tongue with beans and niçoise olives is a crunchy evocation of carnitas, while his farro salad is spared the vegetarian blahs by a dice of turnip and crushed pistachio. The peregrinations of the 33-year-old chef have led him from a downtown boutique loft building to a Hollywood watering hole. Anchoring one side of the courtyard, Ray’s has the elegance of a destination restaurant and the energy of an urban boîte. There are flaws in the Renzo Piano-designed space (what is that stale smell by the entrance?) but not enough to detract from Morningstar’s mastery of robust flavors. You sit in the glass-enclosed room like a character in Edward Hopper’s Nighthawks, only without the alienation. Here comes a freshly made peach financier, satisfying and warm.