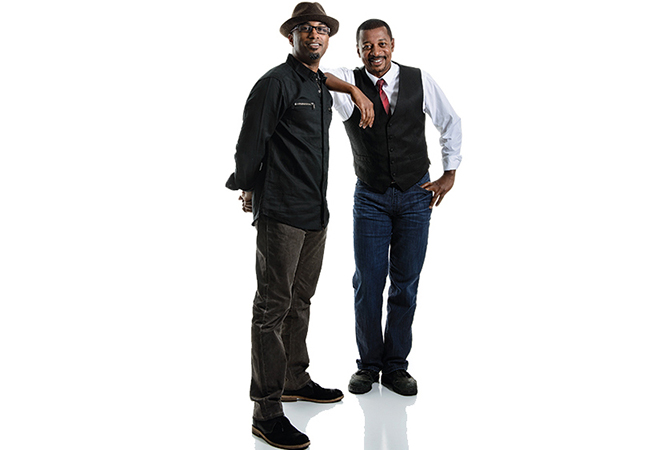 Robert Townsend, the director and star of the 1987 satire Hollywood Shuffle, and one of his biggest fans, director Tim Story (Barbershop, Ride Along), sit down to discuss how Townsend’s small-budget send-up of racism in the entertainment industry became a career-changing classic and inspired a future generation of filmmakers.

Los Angeles: Tim, why don’t you start by talking about first seeing Hollywood Shuffle when you were in high school.

Tim Story: Robert doesn’t understand the impact he’s had on me. Growing up, I knew I wanted to make movies. At seven I saw Star Wars and thought, “I know this isn’t real.” All of the movies of my childhood were like that. Then I got older and Spike Lee came around, and I was like, “OK, a black man can do this!” But Spike Lee wasn’t my voice—he was in New York, and it wasn’t my world. Then Hollywood Shuffle comes along. It spoke to me in many layers. One, it was my backyard: L.A. On top of that, it had humor. I had this core group of friends, and lines from Hollywood Shuffle got into our language. When something happened that was any good, we’d say, “Winky Dinky Dog!” After I saw it, I was like, “I’m going to film school at USC. I’m going to follow that road.” It was an amazing moment. LA: Robert, Hollywood Shuffle was your directorial debut. You shot it in 12 days over the course of two and a half years for $100,000. Did you have any idea that it would become so influential?

Robert Townsend: When I wrote the script for Hollywood Shuffle with Keenen Ivory Wayans, we were just having fun. It was based on our experiences as young actors in Hollywood auditioning for so many bad things, and instead of getting bitter about it, I said, “Why don’t we make a movie about our journey?” So Hollywood Shuffle came out of me saying, “Could I do it?” Spike was doing She’s Gotta Have It in New York. He came out first; I came out second.

TS: I felt like when I watched Hollywood Shuffle, I was in on the joke. Everyone who sees it feels like they are on the inside.

LA: Robert, after Hollywood Shuffle, Eddie Murphy hired you to direct Raw. He was at the height of his career—you were friendly with him but a relative unknown. How did that come about?

RT: Eddie was so big, I wrote a scene in Shuffle about how casting agents at that time all wanted an  “Eddie Murphy type.” They wanted us to be like him, laugh like him, wear a leather jacket—so I put it in the movie. Just before the film opened, I got a call from Eddie. He says, “Hey, man, I want to see this movie y’all been working on.” So we arrange a screening, and Eddie shows up with an entourage that’s 15 deep. It gets to that audition scene, and the room gets very quiet. I hear one of his bodyguards say, “Eddie, they just said your name, man.” Then Eddie starts laughing and shouts, “Rob, you didn’t just do that to me. Hell no, you all didn’t do that!” Afterward I went over to apologize, and he said, “It’s brilliant. I’m getting ready to do a stand-up movie, and I’m looking for a director. Do you want to do it?”

TS: What was the hardest part about making Raw?

RT: It was my second time directing. I thought I had a hit. But when we showed it to the ratings board, they gave the film an X because of the language. We had a big meeting at Eddie’s house and counted every curse word. To get it to an R rating, it was a negotiation. The ratings guy was like, “You have 62 ‘motherfuckers,’ 38 ‘bitches,’ and 48 ‘cocksuckers.’ Are we taking that ‘bitch’ or are you taking that ‘bitch?’ ” And Eddie would say, “No, I need that ‘bitch.’ I’ll give you two ‘motherfuckers’ and a ‘ho’ for that ‘bitch.’ ” And the guy says, “That seems fair. We’re almost there.” And that’s how it went. I reedited the whole film.

LA: I wanted to ask you both about the  Black Acting School  sketch in Hollywood Shuffle. Two of the key “classes” Robert’s British character teaches are playing a butler and a slave. I look at this past Oscar race and wonder, “Have things changed?” TS: I’m going to let Robert speak to that!

RT: Let me say this about 12 Years a Slave and The Butler: They’re both well-made movies, but do we want to continue to see the same? Ultimately we want choices. I remember auditioning for slaves, pimps, and illiterate basketball players, with the producers and directors telling me how to be black. Things have changed because we have Tim here, who’s doing quality work, but there’s always room for more.