Home Uncategorized This Begat That 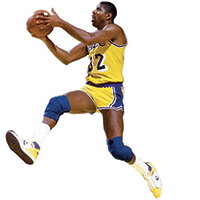 Electronic music pioneer Giorgio Moroder recorded “Reach Out” as the theme song for the 1984 Summer Olympic Games. His synthesizer style so informed Daft Punk’s sound that the French duo featured Moroder on their album Random Access Memories, which won a Grammy in 2014.

The supermarket tabloid is legendary for paying sources for celebrity news. In 1980, it published an exclusive photo of John Lennon’s body after his murder. In 2009, the Web site TMZ reported the death of Michael Jackson before his family did.

In the “Showtime” era, Lakers owner Jerry Buss turned the team around by introducing theater to the Forum. With a fast-breaking offense led by Magic Johnson and Kareem Abdul-Jabbar—along with live bands and dancing girls—Buss landed five NBA championships.

Judy Mazel’s best-selling diet book outlined a six-week plan that included a ten-day intestinal “cleansing” period, with meals composed entirely of fruits such as pineapple. The result was a blueprint for future fads like BluePrint.