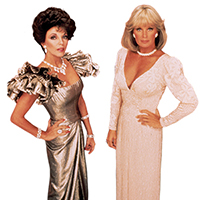 Dynasty Dresses
The popular nighttime soap may have taken place in Denver, but the glam get-ups worn by Joan Collins and Linda Evans were pure West Coast fantasy. “The vibe of the show was very California,” says Esther Shapiro, cocreator of the long-running series. The characters’ fashion sense soon trickled down to the masses. “Saks Fifth Avenue began selling hats because of us,” says Shapiro. “By the third year we were selling our own merchandise. We still get money from the licensees.”  —Chris Nichols

Heaven on Wheels
From 1972 to 1989, Mercedes-Benz produced the R107 series, but it wasn’t until the mid-’80s that the sleek two-seater became a movie star. The vehicle of choice for Bobby Ewing in Dallas and Richard Gere in American Gigolo, the SL purred upwardly mobile wealth. “It was a car for people on the make,” says Jack Nerad, Kelley Blue Book’s executive editorial director, “and the ’80s were all about people on the make.” At $124,000 (in current dollars), you’d have to be. —Jon Alain Guzik The Cult of Souplantation: How a Salad Bar Became an Institution for Seniors, Immigrants, and Hipsters

You Should Be Wearing Smiley Faces