Home Uncategorized The Brand of Make-Believe 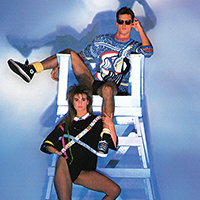 The phrase “L.A. style” was once an oxymoron. The rise of Melrose Avenue, the expansion of Rodeo Drive, and the opening of the Beverly Center in 1982 put that perception to rest. Local fashion companies like Camp Beverly Hills and L.A. Gear helped export the image of the city as a Shangri-la filled with pretty young things, and for the first time Los Angeles itself became an international brand. Here are a few who hawked the aesthetic. What: Apparel line founded in 1977
Who Wore it: Drew Barrymore, Barbra Streisand, Jane Fonda
Fun Fact: The original owners of the Rodeo Drive shop were three movie producers
Still Around? The company, which relaunched in 2012, has a new crop of celebrity fans and is a fashion blogger favorite What: Perfume line started in 1981 as an offshoot of the Rodeo Drive boutique
Who Wore it: Ladies who equated anything vaguely European with class
Fun Fact: It was the first company to put a scent strip in a magazine
Still Around? Get it on eBay What: Shoe label founded in 1979 by Robert Greenberg
Who Wore it: Michael Jackson, Kareem Abdul-Jabbar, Paula Abdul
Fun Fact: Greenberg, who’s also behind Skechers, got his start selling shoelaces in Venice Beach
Still Around? It’s available at Big 5, Modell’s, and Off Broadway Shoes

After a Night of Looting, Melrose Business Owners Survey the Damage