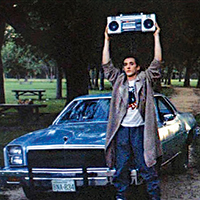 1988, Nakatomi Plaza
→ John McClane (Bruce Willis) fights terrorists—and wins back his wife—from the 30th floor of Nakatomi Plaza, at 2121 Avenue of the Stars in Century City. The 492-foot-tall pink granite-and-gray glass building was completed in 1987 and today serves as 20th Century Fox’s headquarters.

2. BACK TO THE FUTURE

1985, the McFly residence
→ Before a time-bending DeLorean catapults Marty McFly (Michael J. Fox) back 30 years to 1955, the modest family home is a traditional one-story house, at 9303 Roslyndale Avenue in Arleta. Wonder if those electrical towers gave the flux capacitor some kick.

1982, the Hamilton house
→ Phoebe Cates, Jennifer Jason Leigh, and Judge Reinhold may have graduated from doing raunchy teen comedies years ago, but time has stood still for the onscreen house they made famous, at 24124 Welby Way in West Hills.

1989, the boombox scene
→ In one of the most emblematic onscreen moments of the decade, Lloyd Dobler (John Cusack) professes his love for Diane Court (Ione Skye) on her front lawn. Cameron Crowe actually filmed the scene at North Hollywood Park, across the street from a 7-Eleven featured in the movie.

1984, Axel Foley’s apartment building
→ The journey to 90210 begins when Axel Foley (Eddie Murphy) attempts to solve his best friend’s murder from a seedy apartment in his native Detroit. Foley’s digs can in fact be found at 685 Witmer Street in Westlake.

1982, Elliott’s house
→ After being stranded on planet Earth, Steven Spielberg’s soon-to-be famous extraterrestrial finds shelter (and a serious Reese’s Pieces habit) at this modest two-story home at 7121 Lonzo Street in Tujunga, in the foothills of the San Gabriel Mountains.