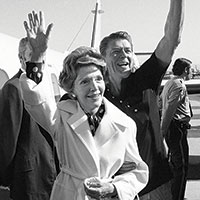 President-elect Reagan and his wife greet fans in Palm Springs before boarding a private jet home to L.A. on January 2, 1981. During the eight years of his presidency, California’s adopted son (he was from Illinois) would turn a Santa Barbara ranch and the Century Plaza Hotel into his western White Houses. A Look Inside Sunnylands, the Magnificent Mid-Century Estate Near Palm Springs