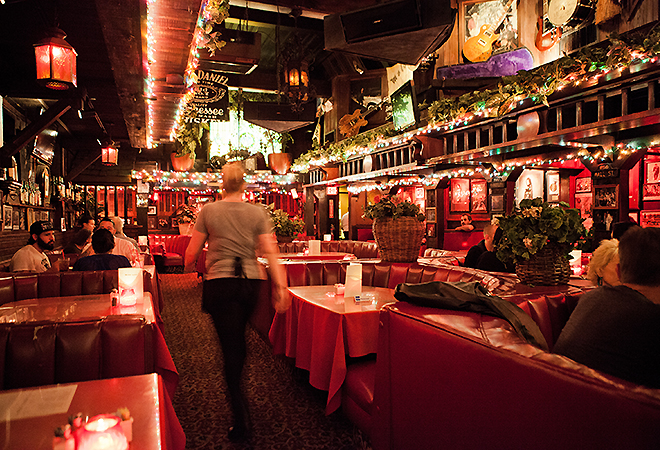 Everyone from rockers (Robert Plant, David Lee Roth, Axl Rose) to comedians (John Belushi, Sam Kinison) have hung out at the Rainbow Bar & Grill on the Sunset Strip

Since it opened in 1972, the Rainbow Bar & Grill has been one of the few places in Los Angeles where you can be guaranteed a celebrity sighting. Granted, that celebrity may be the bassist of a defunct hair metal band, but the grill remains among the most storied spots on the Sunset Strip (and the people-watching is pretty great, too). Co-owner Mikeal Maglieri, 63, witnessed the scene evolve from folk to disco to heavy metal and beyond. He talks about his headbanging clientele. We also own the Whisky, and that’s what started it all. A lot of bands would play there and then come here to hang. It’s a whole different vibe here, though, than at the Whisky. They weren’t coming here to see a show—they were the show. And it’s still like that today.

The Rainbow was huge in the ’80s. People walked into the restaurant and around the center of the room while everyone was eating dinner. Even if you were a rock star or just a regular person, the point was to see who was in there or they wanted to be seen. It worked both ways. And then you would hit two o’clock in the morning, and it was “no-tell motel” time. If you didn’t have a date, you would find one there. There were at least 300 people every night in the parking lot.

Rod Stewart, C.C. DeVille, and Mötley Crüe were all regulars. All their photos are on the wall. Axl Rose was thrown out of here about 11 times. David Lee Roth was good friends with my brother, and he was tossed out about 13 times. I think they were trying to break a record. They were literally thrown out, like, “Get the hell out and don’t come back!” They would just get so screwed up and out of control. It was off the hook. Sam Kinison could be a spectacle, but believe it or not, he didn’t offend anyone. People loved it. He was a fun guy to hang with. But I have seen C.C. DeVille be an asshole. There are just certain people that, when they drink too much, they become assholes. In 1982, Robin Williams, Robert De Niro, and John Belushi were here the night John OD’d. John came in, picked up a broad, scored some dope, went back to the Chateau Marmont, and overdosed that evening.

We started putting memorabilia on the walls from the get-go. Later we started taking snapshots at the front door, and we’d hang them on the walls. There are layers after layers of photos.

The Sunset Strip is where people got noticed. They weren’t going to get noticed in Silver Lake or out at the beach or in Orange County. If you weren’t playing the Whisky, Gazzari’s, or the Troubadour, then you were hanging at the Rainbow. Just last night Slash was sitting here, and Ozzy was here four hours ago.

We aren’t going anywhere! We own the property, so we are not moving. It would be over my dead body to ever close the Rainbow.